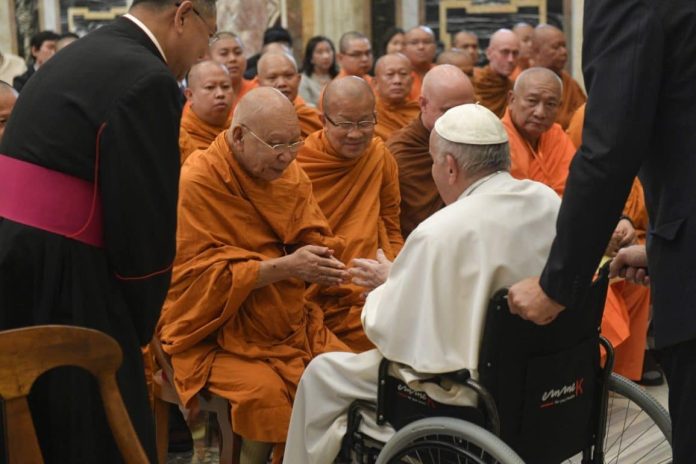 A Buddhist delegation from the Sangha Assembly of Thailand in Chetuphon, composed of 33 monks from the Theravada and Mahayana streams, led by Venerable Somdej Phra Maha Theerajarn, recently visited Rome, accompanied by many lay Buddhists and several representatives of the Catholic Church in Thailand.

The meeting marked the 50th anniversary of the historic meeting between Pope Paul VI and the 17th Buddhist Supreme Patriarch of Thailand, Venerable Somdej Phra Wannarat, which took place on June 5, 1972.

To mark the anniversary, the Pope said that Catholics and Buddhists should work together <to cultivate compassion and hospitality toward all human beings, especially the poor and marginalized>.

The meeting also included a conference on “Buddhist-Christian Friendship for a Culture of Encounter” at the Pontifical Urbaniana University, which is an institute of higher learning of the Catholic Church that specializes in the formation of clergy.

During his speech Pope Francis also recalled two other encounters, one with a Thai delegation in 2018 that came with a translation of an ancient Buddhist manuscript in Pali language, preciously preserved in the Vatican library, as well as the papal visit that took place in Thailand in November 2019.

Such expressions of fraternity, pave the way for a more united humanity and ignite a light of hope in the hearts of those who long for a better world in these troubled times.