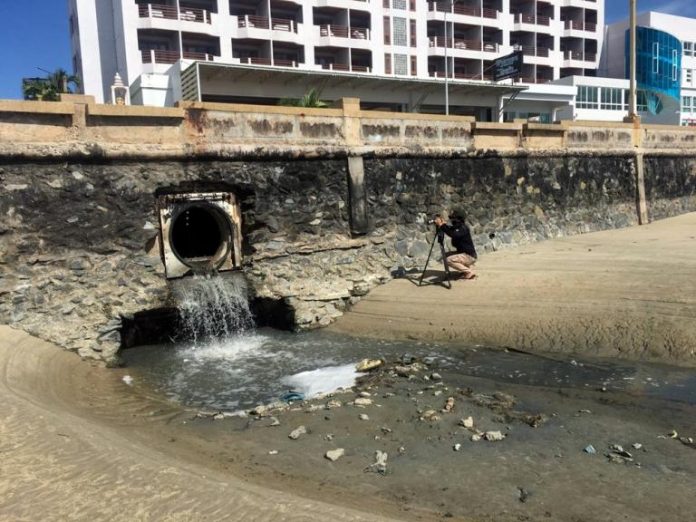 On June 19, residents of Koh Lak sub-district, Muang district, Prachuap Khiri Khan province, posted photos on their personal Facebook page. After repeated problems, there was never an explanation from a government agency. Indeed, the community’s water flows into the beach of Prachuap Bay. The end of the pipe is located in front of the Hat Thong Hotel. The community’s water passes through a wastewater treatment system built with a budget of over 400 million baht behind Wat Thammikaram before discharging the water into the sea.

More recently, Ajarn Seksan Chanthon, the working group of the Prachuap Khiri Khan Provincial People’s Anti-Corruption Network, revealed that the information was presented to reporters from the central TV station. More than 20 years ago, no environmental agency or organization was legally responsible for monitoring the beaches. Fixed to maintain the environment of the beach in the tourist town which is an important landmark in tourism for most people in the area seem normal. At the end of May 2022, the documents were submitted to the Prachuap Khiri Khan Regional Harbors Board. But there is still no answer as to how to proceed.

Seksan Province said that on June 20, it will follow up and inquire with the port office. If no progress is made, it will authorize lawyers to take legal action against the agencies involved under Section 157 of the Penal Code, as more than 20 sewage discharges into the sea have been discovered. It is considered an offense under Section 119 of the Navigation Act in Thai waters, B.E. The regional port office must monitor the discharge of water from communities that have waste.