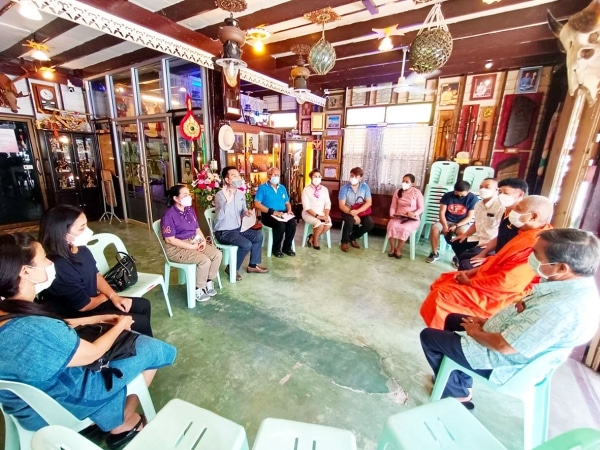 On June 11, Asst. Prof. Napaporn Naktim, Vice President of Wang Klai Kangwon Sathien Charoenruen, as well as the Governor and the Culture Officer of Prachuap Province met to discuss the preparation of street art in Susuk Street.

Afterwards, the chairman of the provincial painters community and stakeholders visited the site to see the street art places.

Asst. Prof. Napaporn said that creating street art in a space can help inspire and create a creative economy by blending the identity that connects tourism and local history – expressive culture or artistic support determine pilot areas in 10 target provinces, namely Lampang, Samut Songkhram, Nakhon Pathom, Surat Thani, Chumphon, Phang Nga, Nakhon Si Thammarat, Kanchanaburi and Prachuap Khiri Khan. For the part of Prachuap province, the street art zone has been defined in the area of Sua Suek cultural road. “Hua Ban Community” has a long history since the Ayutthaya period, the existence of the community is strong with a local lifestyle as well as a beautiful identity and culture. This art will be on the way to Wing 5, Mueang Prachuap District The total distance is about 800 meters, the budget limit is 300,000 baht.

“Art pictures that will be made and displayed on the walls of Susuk Cultural Road. This is a brainstorming session for artists in the province. In collaboration with the provincial council of culture, the president of the community and the people involved have defined the concept in 4 groups of images that show their identity. The history, culture, traditions, lifestyle and way of life of the community, where the street art is drawn with three-dimensional images to be made for the tourists to act on the image. This makes the image that has the power to convey the story with the emotional dimension, feeling, and pleasure with this image that is the charm of the images of street art. In addition to the local artists in the province, there are also professors and students of Pohchang College Rajamangala University of Technology Rattanakosin which is one of the faculties that provide teaching and learning in various fields of fine arts. There are many famous artists who will join the art show on Susuk Cultural Street. With the consent of the owner of the place, both the government and private sectors, draw an overall picture of 14 points. The total area of 208.1 square meters, which when completed, “Street Art, Street Fight” will be another attraction for tourists to visit and share selfies on social media. This is another way to promote tourism in Prachuap province,” said Assistant Professor Napaporn.