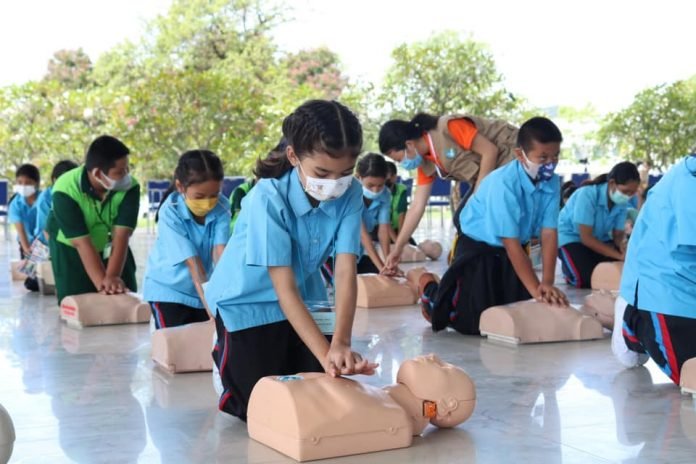 The director of the Educational Institution of Public Health Bangkok Hospital in Hua Hin District said that there are 7 schools under the municipal jurisdiction. The students in grades 5-6 participated in the training in 2 batches of 180 people each, with a total of 360 people. Hua Hin City Rescue Volunteer Army Sergeant Major Instructor and Hotel Operations Representative participated in the leadership of the swimming course “Floating Survival” with 40 participants. A total of 400 people participated in the whole program, and the training was held from June 8 to 10th.

Mr Nopporn said the project was organised by a health promotion campaign. The Hua Hin City Department of Public Health and Environment supported by the Naval Medical Department, Naval Ordnance Department, provides working teams and lecturers. The Royal Thai Army Sergeant School Club “Share for Life Join for Love” Sawang Hua Hin Thammasat Foundation and the group of network partners provide knowledge and practice so that children can learn to swim and assist drowning persons in the right way.

Through the teens learn how to perform CPR and use an AED (automatic defibrillator) in addition to drowning prevention safety measures to build a practical survival lesson. According to the Ministry of Public Health Curriculum, Hua Hin City received the honorary plaque on March 3; the 2021 National Gold Award, ” Outstanding Facilitator Team (Prevention of Drowning)”. The award was presented at the Ministry of Public Health Conference by the Prime Minister, General Prayuth.

According to data from the Ministry of Public Health in 2021, 56% of children under the age of 15 could be saved from drowning to reduce drowning deaths to 2.5 per 100,000 children. By 2027, focusing on 3 items, including playing and floating area, it can help build the necessary skills and increase their chances of survival, and help others. From the situation in Prachuap province, among children under 15 years old from 2015 to 2020, 12 deaths were found by drowning, and Nong Kae Subdistrict, there were 1 death from drowning in 2022.