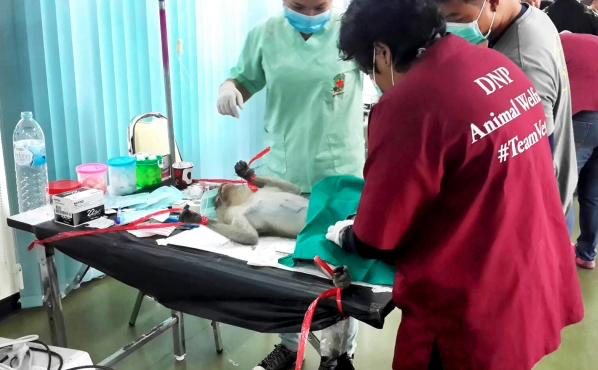 On May 27, at the Hua Hin Municipality Office, the Mayor of Hua Hin signed a Memorandum of Understanding with Mr. Panya Talalaksam, Director of the Coordination Division with the representative of the Department of National Parks, Wildlife and Plant Conservation to establish a macaque control project in the Khao Takiab and Khao Hin area.

The head of the government agency and relevant officials attended the signing ceremony. After the Hua Hin Municipality was approved by the Governor of Prachuap Khiri Khan Province to provide a grant to the Conservation Area 3 office in the amount of 1,162,460 baht for a macaque population control project in the Khao Takiab and Khao Hin Lek Fai area. This project is implemented continuously for the fifth year to control the expansion of macaques and reach an equilibrium point adapted to the conditions of the region. But also to reduce the impact of macaque disturbances on the communities and people of the region.

The objective is to sterilize 600 male and female macaques to control the population by reducing the reproduction rate so as not to affect the livelihoods of the people in the area and to control infectious diseases from wildlife to humans.

SourceBanmuang
Share
Facebook
Twitter
Previous article
Collaboration between Microsoft and EGAT to reduce carbon emissions
Next article
June’s crypto-currency market, according to Satang’s founder, is down.