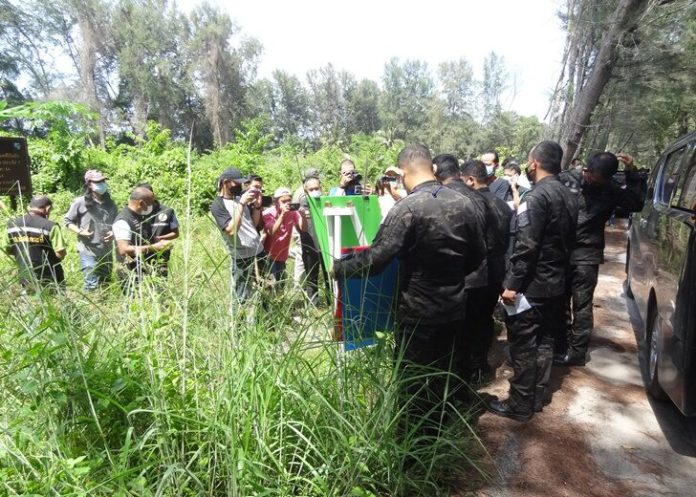 At 09.00 am on April 27th, Mr. Traiyarit Temhiwong, Director -General of the Department of Special Investigation, along with the group visited the Special Operation Center Region 8 (OPD 8) to perform civil service in Surat Thani, Krabi, Phang Nga and Phuket.

In this regard, Mr. Triya Rit, together with the group attended the meeting with Mr. Suphot Phurattanapop, Director of the Office of Conservation Area 5, Nakhon Si Thammarat, Mr. Surasak Anusorn, Director of Conservation, Resource Prevention and Land Problems is working with a group to solve the problem of government land invasion & Destruction of natural resources and the environment.
The alloted working group set a meeting to solve the problem of government land invasion in Nopparat Thara National Park (Ao Nang), Krabi province. The process of issuing land title deeds was tried many times before successfully. Mr. Chaiyut Chaikhongrak, who issued the deed of Koh Nui Nok and Nui Nai Ko Lanta District is involved with group of officials in this mission.

On December 2nd, 2021, criminal case 627/2564 at Village No. 4, Ao Nang Subdistrict, Mueang Krabi District, Krabi Province, a total of 6 plots are divided into 38 Sub -plot 76.37 acres. Krabi Province After seizing since 2021 is to accelerate the offenders involved in the issuance of documents illegally and also seized the land back. Together with relevant agencies the area has been inspected and found that there was an invasion in the national park Nopparat Thara Beach-Phi Phi Islands Or in the Ao Nang -Pa Hang Nak forest covering the area of ​​Ao Nang Subdistrict And Khao Thong Subdistrict Mueang Krabi District Krabi Province Which has a total area of ​​28,934 acre.