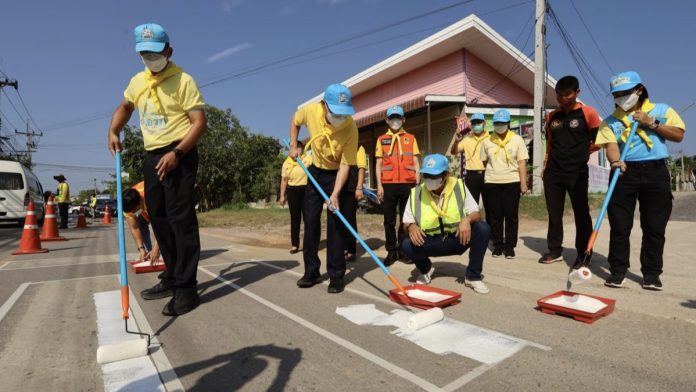 A few volunteer activities led by the city and district heads had occurred to raise social awareness of cleanliness and safety in public areas.

On April 21, 2022, Mr. Sathien Charoenruen, Governor of Prachuap Khiri Khan Province, along with Mr. Preeda Sukjai, Chief of Pranburi District, led the royal volunteer group of  Wang Phong Subdistrict to develop road safety campaigns such as improving traffic signs, painting a crosswalk in front of Ban Wang Phong School to reduce the accident rate to zero. According to the resolution of the Road Safety Administration Center Prachuap Khiri Khan Province, the road safety campaign activities have been set up under the name “Campaign to Reduce Accidents Around the Crossings” and are continuously run on a monthly basis, every 21st of the month, to enforce the traffic law strictly. Besides the repainted crosswalks that have been highlighted, an awareness for drivers to slow down when they reach a community area, an educational institution, a medical facility, or an area with congestion is being spread out to prevent potential losses.

There are other active volunteer projects ongoing in Prachuap Khiri Khan Province. The volunteer project for the care of the elderly with dependency was initiated to reduce the government’s financial burdens on medical care for the elderly and to provide jobs to those who are affected by the pandemic. District Health Volunteer Group (Or Sor Mor in Thai) is another one that drives the well-being of people in a district. A few years ago, Or Sor Mor Hua Hin created its application to update work real-time and facilitate a quicker connection between the agency and people in case of health concerns and support.