Prachuap speeding up solutions to La-U elephants living outside forest 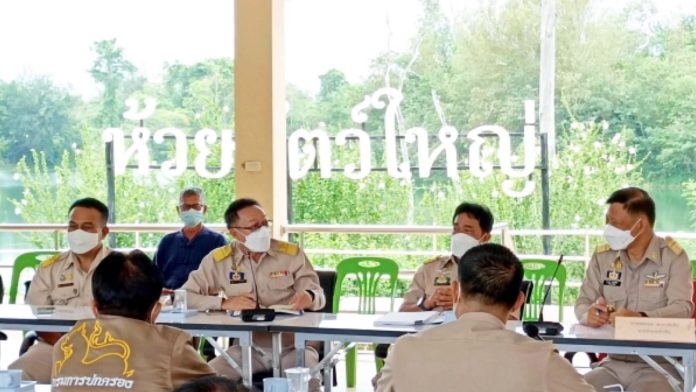 It is reported that La-U elephants encroached on the farming areas where they attacked people, causing injuries and deaths in the past few days. The Prachuap Khiri Khan authorities and relevant agencies are setting up solutions to prevent the upcoming cases.

The meeting concluded the solution to both short-term and long-term problems. In short, the relevant agencies must jointly set up a patrol to watch out for wild elephants in the area and improve the landscape of public living areas prone to invasion of wild elephants so that people can see the wild elephants clearly and avoid them. The set up of an incident reporting center in the event of a wild elephant invasion is done to allow the Huai Sat Yai Subdistrict Administrative Organization to be the host of the operation with the Kamnan village headman in the area. In addition, there is a monthly meeting to discuss ways to solve the problem of wild elephant invasion by assigning the Huai Sat Yai Subdistrict Administrative Organization to gather information and report the results of the operation to the provincial governor. The study of the guidelines for helping people to heal in the event of an accident with wild elephants is also conducted.

As for long-term solutions, Hua Hin District will improve the master plan to solve the problems of wild elephants in accordance with the current situation and assign departments responsible for solving each problem by establishing a relief fund for victims of wild elephants, completing the construction of the elephant fences, and repairing the damaged fences, including the installation of electric lights at the points where wild elephants tend to come out of the forest to earn their livelihood.

Polkit Phuangwalaisin, Hua Hin District Chief, said that such problems have accumulated for a long time, and relevant agencies have always tried to fix the problem. From the problems that are arising today, it is an opportunity for all parties to turn their heads to review the reasons why the solution has not progressed as it should be. All parties must cooperate, including the public, private, and the people living in the area to lead to sustainable solutions.