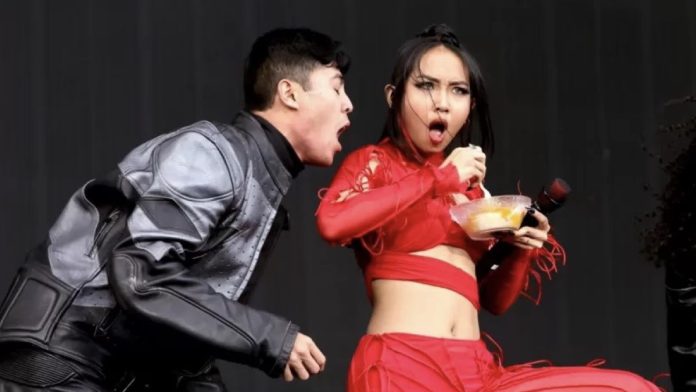 Department of Cultural Promotion visited Milli to help promote ‘Mango Sticky Rice’ and push it as a cultural intangible heritage.

Mr. Chai Nakhonchai, Director-General of the Department of Cultural Promotion, said that from the performance of Milli Danupha Kanathirakul, a Thai artist at the world-class music and arts festival called ‘Coachella’ in California, USA, before the show ended, the teen artist ate mango sticky rice on stage, becoming a popular trend on social media, both among Thai and foreigners.

The incident has made a positive effect on pushing the soft power of Thailand in the same way as Korea has been doing, which is eating and drinking culture through Korean series. The introduction of Milli’s Mango Sticky Rice on the world stage resulted in foreigners watching the concert becoming very interested in Thai Mango Sticky Rice, similarly to the phenomenon of Lisa Lalisa Manoban talking about standing meatballs in Buriram Province, which generated a lot of income for meatball entrepreneurs.

Mango Sticky Rice is one of the Thai dishes prepared to be nominated as a representative list of the intangible cultural heritage of humanity or intangible cultural heritage presented to UNESCO. At the same time, it is also a menu in the Thai Dishcovery project that has been co-operated by chefs from famous restaurants and is becoming popular by the new generation developing a presentation style and appearance. The taste is compatible with cultural trends but still maintains the traditional Thai taste.

Milli is the first Thai female rapper who has performed at Coachella. She rose to prominence nationally with her debut single “Phak Kon” (Rest First), which was released in 2020. It was followed by another successful single “Sud Pang” (Very Awesome) later in the year. She is now 19 years and studying at the department of music, Assumption University.