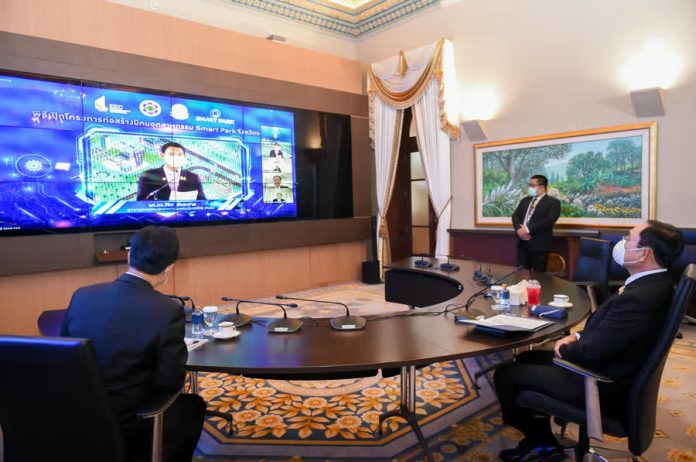 The government has inaugurated the construction of a smart industrial park project in Rayong, targeting S-Curve industries utilizing advanced technologies. The new industrial park is a part of the government’s Eastern Economic Corridor (EEC) project that aims to create jobs and promote sustainable economic growth.

Industry Minister Suriya Jungrungreangkit said in his teleconference speech that the Smart Park project was approved by the Cabinet on September 29, 2020 to be built on a 1,400-rai plot in Tambon Huay Pong in Muang district of Rayong province.

The THB2.37-billion project will drive the country’s economy through investment in the high-tech industrial zone, Suriya said.

He said the ongoing construction is hiring about 200 workers and the construction will lead to circulation of THB24 million a year in the province.

Once the Smart Park industrial zone is open, it would create 7,400 jobs and a circulation of THB1.3 billion in the local economy a year, the minister added.

“From the plan, after the construction contract is signed, it will take three years to build Smart Park and it will be in operation in 2024,” Suriya said.

The government has been streamlining EEC development as a way to advance economic and social initiatives, while also enhancing people’s quality of life.

The project is expected to create more jobs, boost the local economy and further distribute wealth among local communities.

Speaking on stage at the construction site, Industrial Estate Authority of Thailand governor Weerit Amrapal said the Smart Park project will cater to new S-Curve industries that use advanced technologies, which are environmentally friendly.

Additionally, Gen Prayut urged all sectors to pursue projects that benefit the business and industrial sectors, as well as the general public, while positioning the EEC as an attractive destination for investors and overseas visitors.