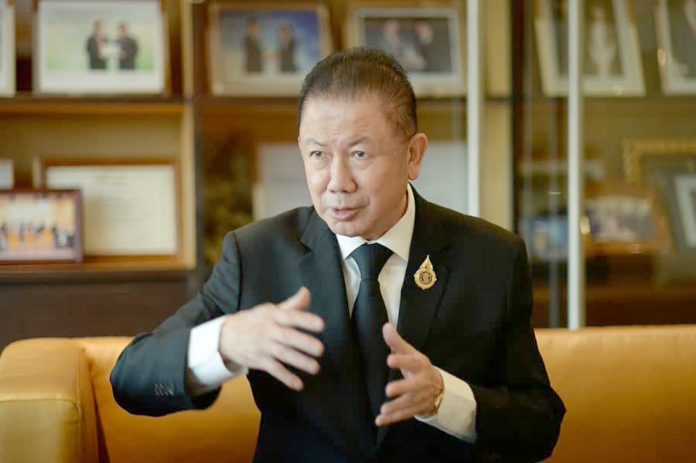 The Chairman of the Thai Chamber of Commerce (TCC) said he agreed with the government’s decision to remain neutral in the Ukraine war.

TCC Chairman Sanan Angubolkul made the comment at the “The Big Issue 2022” panel discussion. He said Thailand’s position of neutrality will benefit the Kingdom, as it needs tourists and investors from abroad, including those from Russia and Ukraine.

Previously government spokesman Thanakorn Wangboonkongchana had clarified the government’s stance on the Russia-Ukraine situation by saying that since the start of the conflict, Prime Minister and Defence Minister Prayut Chan-o-cha had laid down a policy of supporting dialogue to find a peaceful resolution in accordance with the principles of the United Nations Charter.

Adul Kamlaithong, an independent scholar on Russia, has previously urged the government to refrain from choosing sides. He states that the war will assuredly have an impact on fuel prices in Thailand, given Russia and Ukraine’s status as major energy exporters.

“If we are neutral, the relationship between Thailand, Ukraine and Russia will not be affected,” he said.

TCC Chairman Sanan Angubolkul also suggested the administration consider expanding the public debt ceiling from 60% to 70%. The matter, although having already received a green light from the Cabinet, is awaiting endorsement from the parliament. Sanan explained that the move will provide Thailand access to more funds for economic rehabilitation and stimulation. He also urged the government to ensure that Thailand will not enter the Stagflation state.

Stagflation is a situation in which the inflation rate is high, the economic growth rate slows, and unemployment remains steadily high. It presents a dilemma for economic policy, since actions intended to lower inflation may exacerbate unemployment.

The TCC Chairman said the Kingdom should move up the declaration of COVID-19 as an endemic from July to sooner and allow more tourists and investors to enter the nation more freely, in order to prevent opportunity loss.

It is inevitable that commodity prices will surge due to the ongoing Black Sea conflict, according to Sanan. He suggested businesses consider stockpiling raw materials to ensure uninterrupted production in the long run.