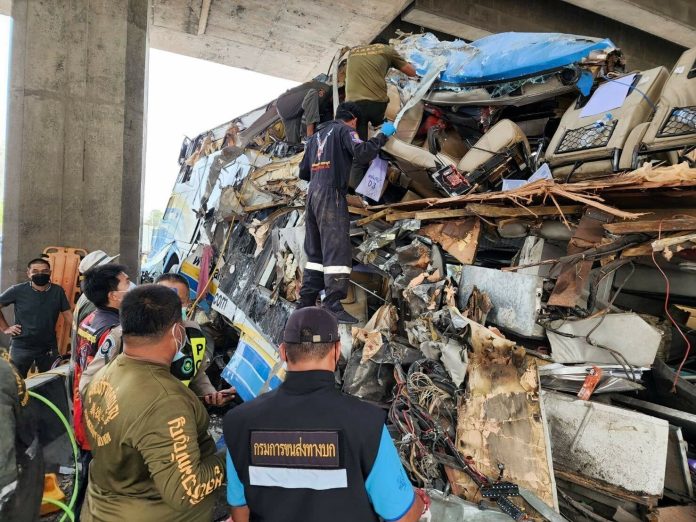 In an update from the Mueang Saraburi Police Station, Pol. Col. Chetchai Chetsiri, the Superintendent, revealed that after a physical examination of the driver, Narinsat Hongsa, 30, a tour driver, was found to have methamphetamine in his body.

In the accident eight passengers were killed with more than 20 injured after a double-decker bus crashed into the concrete pillar near Saraburi. A total of 32 passengers were on the Bangkok – Suwannaphum bus operated by the state-run Transport Company. Five people died immediately at the scene and three later died at the hospital. 22 people, including the driver, were admitted to local hospitals to treat their injuries. The results of the urine test and the blood test showed that there were drugs in the body

The driver says he was driving at 89 kilometres per hour i when he drifted off, causing the bus to hit the pillar on Mittraphap Road. The police have stated that 30 year old Narinsart Hongsa has acknowledge the allegations, and has confessed to being the driver of the bus at the scene and actually “taking methamphetamines”.

The tour driver was charged with the following 2 counts.