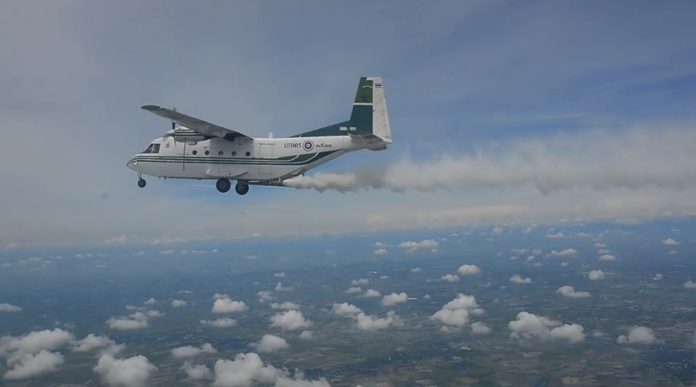 The Ministry of Agriculture and Cooperatives recently initiated its annual rainmaking operations to help combat drought and wildfires starting with Nakhon Sawan Province.

The commencement ceremony was chaired by Agriculture and Cooperatives Minister Chalermchai Sri-on. Rainmaking or cloud-seeding procedures are handled by the Department of Royal Rainmaking and Agricultural Aviation. The launch featured a fleet of flying airplanes from the rainmaking department and the Royal Thai Air Force.

Minister Chalermchai said many areas in Thailand were facing water scarcity, with water levels in major dams and reservoirs reportedly seeing significant drops. There is a possibility of wildfires every summer that bring heavy smoke and dust particles to local communities. The cloud-seeding operations are intended to help prevent and mitigate these issues.

This year, ten cloud-seeding operation centers will be set up in high-risk areas, equipped with 24 planes from both the rainmaking department and the air force.

Samroeng Sangphuwong, director-general of the rainmaking department, said authorities have been working with local communities to identify hotspots and prevent wildfires.

Department of Royal Rainmaking and Agricultural Aviation (DRRAA) was established in 1992 by the order of King Rama IX it introduced artificial rainmaking by releasing hygroscopic chemicals to increase humidity in the air as a result the chance of rainfall increase in those areas. Additionally the operation could also lightly reduce toxicity in the air making people in those area able to breath cleaner air and minimising the possibilities codevelop lung cancer.