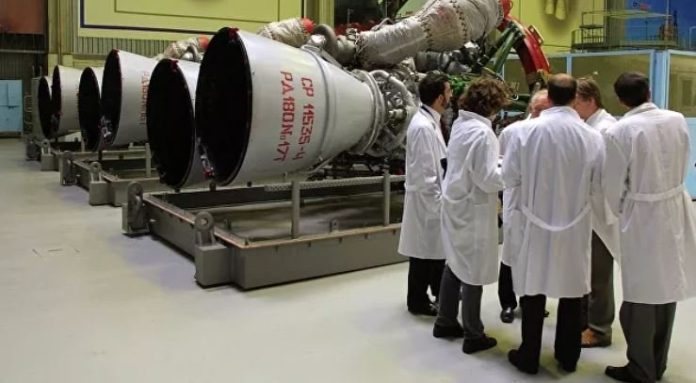 Russia is halting deliveries of rocket engines to the U.S., but the space-launch company owned by Boeing Co. and Lockheed Martin Corp. has said it has enough of those motors in hand for upcoming missions.

Dmitry Rogozin, head of the state space agency Roscosmos, said: “In a situation like this, we can’t supply the United States with our world’s best rocket engines. Let them fly on something else, their broomsticks, I don’t know what,” Rogozin said on state Russian television.

According to Rogozin, Russia has delivered a total of 122 RD-180 engines to the U.S. since the 1990s, of which 98 have been used to power Atlas launch vehicles.

Roscosmos will also stop servicing rocket engines it had previously delivered to the U.S., Rogozin said, adding that the U.S. still had 24 engines that would now be left without Russian technical assistance.

The U.S. has long planned to end its reliance on Russian rocket engines, but efforts have been mired by technical and funding challenges that drove the Pentagon to continue using Russian-manufactured engines several years longer than originally anticipated.

Earlier, Russia was suspending cooperation with Europe on space launches from the Kourou spaceport in French Guiana in response to Western sanctions over Ukraine.

Moscow has also demanded guarantees from British satellite company OneWeb that its satellites would not be used for military purposes. OneWeb, in which the British government has a stake, said on Thursday it was suspending all launches from Russia’s Baikonur Cosmodrome in Kazakhstan.

On Thursday, British satellite company OneWeb said it was suspending all launches from Russia’s Baikonur Cosmodrome in Kazakhstan after Moscow’s space agency demanded guarantees that its technology would not be used for military purposes.

The British government, which owns a stake in OneWeb, said it supported the decision.

“In light of Russia’s illegal and unprovoked invasion of Ukraine, we are reviewing our participation in all further projects involving Russian collaboration,” the government said.

A Soyuz rocket carrying 36 OneWeb satellites was lifted onto a launchpad at the Baikonur Cosmodrome on Wednesday, according to pictures issued by Russia’s space agency Roscosmos.

Roscosmos head Dmitry Rogozin said on Wednesday that his agency wanted OneWeb to provide guarantees that its satellites are not going to be used against Russia, according to an Interfax report.

Without these, Rogozin said Russia would cancel Friday’s planned launch from the Baikonur cosmodrome, which Russia rents from Kazakhstan, without compensating OneWeb, the Russian news agency reported

OneWeb, which will offer broadband via a constellation of 650 satellites, was rescued from bankruptcy by Britain and Bharti Global in 2020. Eutelsat and SoftBank have also invested.

Elon Musk, the billionaire chief executive of SpaceX, has donated Starlink satellite internet terminals to Ukraine, where internet connections have been disrupted due to the Russian invasion.

Rogozin said Russia would now focus on creating dual-purpose spacecraft in line with the needs of Roscosmos and the Defence Ministry.