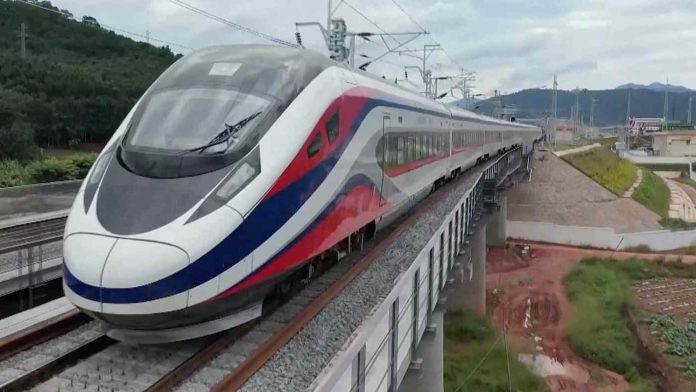 The Laos-China Railway Company (LCRC) has announced it will operate slower-speed trains in addition to the two existing high-speed EMU (electric multiple unit) trains to meet the growing needs of passengers.

The company is also planning to run an additional 120 km/h air-conditioned passenger train on the railway. The first such train arrived in Vientiane on Tuesday.

According to the operation department of the LCRC, the train, with a total of 15 carriages including 14 hard-seated carriages and one soft sleeping car, can carry 1,664 passengers.

The LCRC is currently preparing for the opening of the 120 km/h train in accordance with the local demands, and the specific opening time and the number of carriages will be further clarified.

As of Tuesday, the Lao section of the China-Laos Railway had run 146 pairs of EMU passenger trains, transporting 144,610 passengers, with a maximum of 2,804 on Jan. 3 and an average occupancy rate of 68.76 percent.

With the approaching of the Lao New Year, the LCRC is studying and formulating an operation plan of additional trains during the most important festival in Laos.

The China-Laos Railway connects Kunming in southwest China’s Yunnan Province with the Lao capital Vientiane. The 1,035-km cross-border railway was launched on Dec. 3, 2021. The line’s northern end is connected to the Chinese rail system in Mohan, through the Yuxi–Mohan railway. The railway end at Vientiane south cargo station. The Boten–Vientiane railway is an integral section of the central line on the Kunming–Singapore railway, and was constructed as part of the Belt and Road Initiative.

Since the line uses a different rail gauge from the existing Thai Northeastern Line link from Bangkok to Thanaleng, through running into Thailand is not yet possible. However, the Vientiane end of the line will eventually cross the Mekong River on a new bridge to meet up with the Bangkok–Nong Khai high-speed railway.