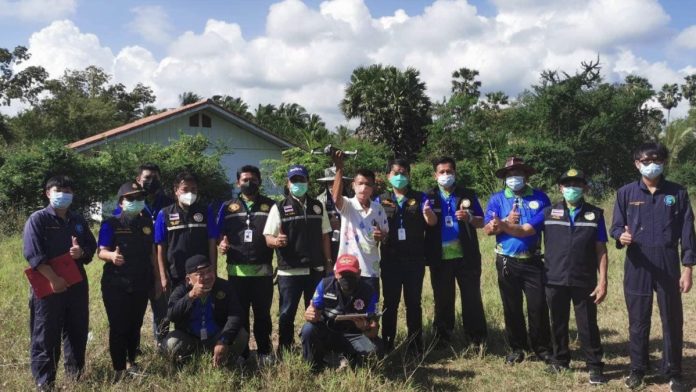 Mayor Issara Kanchanarat revealed that the Ban Krut municipality has adopted drone technology to create the tax and property mapping system for accurate and up-to-date storage to know the clear boundaries of administrative boundaries, basic information, roads, canals, bridges, amount of land, number of assets in every plot. This information can be used in other areas such as public health, economic zone, planning leading to a smart city. There is a discrepancy, but we have adapted the model by using drones to survey all the land plots in the municipality. Then, the information is added to the land plot database from the Land Department, which is updated information. Therefore, there will be no errors in the owner’s misrepresentation of the boundary line or neglects of their own boundaries, totaling 3,000 plots in the municipality, The survey was conducted, and community leaders were invited to provide additional information for clarity, combined with the civil registration system in the matter of the house numbers in each plot.

Mr. Isara added that “the tax map is not something that the municipality has made by itself, but is a requirement from the Ministry of Interior. Let every area be prepared, but what we do is different from every area, that is, we use technology to help. We use a drone to help which is considered the first in Prachuap Province, and the first in the lower central region. The municipality has collaborated with Mr. Suphachat Butdikan, who is a consultant of the city planning of Chiang Mai Province. We bring a team to help collect data, teach methods and techniques for data storage. At present, Ban Krut municipality has a total area of ​​12.61 square kilometers. There are more than 3,000 plots of land, but it takes only 14 days to prepare a tax map, which at present the information is 100% complete.”

In addition, at present, the municipality has started to implement a smart city project, smart pumping, which will facilitate villagers to scan QR codes and pay for services via a mobile banking application. In addition, the municipality will also have a project for a real smart city in the matters of child development centers, electric poles, elderly cares and many other projects to bring in technology 4.0 through an application on a mobile phone to increase convenience and reduce the procedure for the people as much as possible.