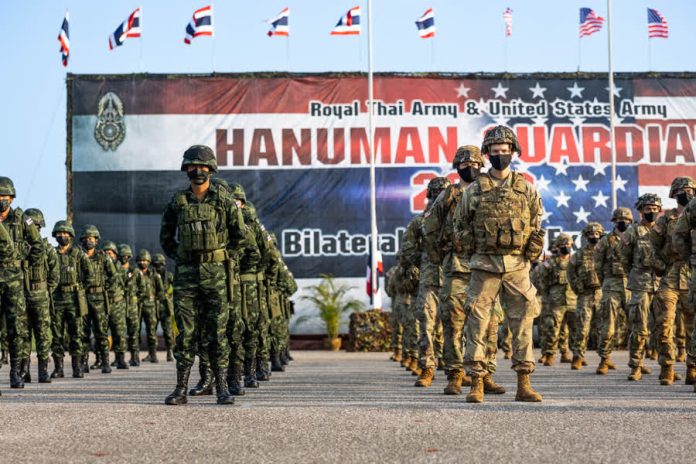 Thai and US military forces recently concluded two concurrent military exercises known as Cobra Gold and Hanuman Guardian. The first is a long-running multinational military exercise held in Thailand every year, while the second focuses on paratroopers and bolstering the capacities of the Thai and US armed forces.

The Hanuman Guardian exercise for paratroopers – now in its 11th year – was held for two days, from February 24 to 25, in the provinces of Prachuap Khiri Khan and Lopburi. Around 1,000 troops from the Thai army and some 600 US troops participated in the exercise while closely adhering to COVID-19 prevention protocols. All participants were required to remain within the training grounds at all times and travel by chartered flights.

Army Deputy Chief Gen Supachok Thawatpeerachai on Thursday observed a Cobra Gold Command Post Exercise (CPX) in Rayong province, after which he received a summary and was briefed on the results.

Cobra Gold is the largest joint military exercise in Southeast Asia. The Royal Thai Armed Forces and the United States Indo-Pacific Command jointly host the drills every year to boost military ties between friendly nations. Cobra Gold also aims to improve combat management for application in crisis situations. This year marked the 41st time that the exercise was held. Cobra Gold 2022 runs from February 20 to March 5 under a Bubble and Seal COVID-19 prevention approach.

Sourcehttps://thainews.prd.go.th
Share
Facebook
Twitter
Previous article
The Ministry of Labor offers loans to freelancers
Next article
DDC and Mahidol University cooperate for a solution to eliminating Tuberculosis in Thailand