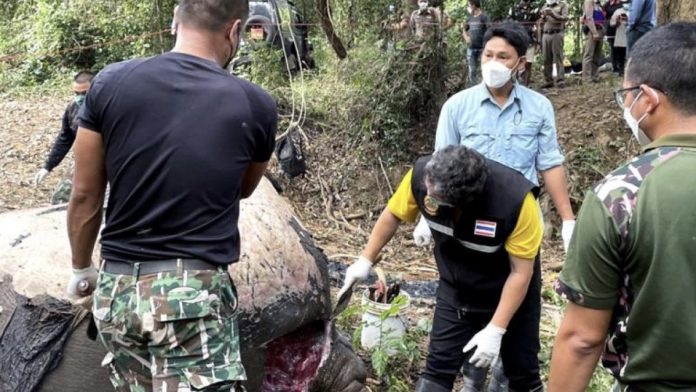 The officer then used a metal detector to scan the elephant’s body, finding a suspicious object above the base of the tail before allowing the veterinarians to dissect it and found a shotgun ammunition, size 12, at the hip next to the base of the tail up above of approximately 50 centimeters, a bullet in the muscle layer about 10 centimeters deep from the skin; all were kept as evidence. Before abdominal dissection, inflammation and pustules were found in the abdominal cavity, especially the area adjacent to the lumbar spine that stretches to the right pelvic area. and found tearing of the abdominal wall in the abdomen and pelvic area The veterinary team initially assumed that the cause of death of the wild elephant was due to inflammation and infection of the abdominal cavity (peritonitis) before taking a sample of stomach food scraps to a laboratory to determine the exact cause again. Then, the elephant body was put under the ground by using a backhoe, sprayed with a disinfectant, and sprinkled with lime around the spot according to academic principles. After that, evidence was reported to find the person who shot the elephant to be prosecuted by the law.

According to WWF, about 2,500 elephants are estimated to be left in wild in Thailand. The long-term survival of the wild Asian elephant populations in Thailand is also under severe threat due to poaching for ivory and elephant calves, as well as habitat loss.

Share
Facebook
Twitter
Previous article
The growth rate still does not put the Thai economy back to its value in 2019
Next article
Flooding in the South, Authorities have been assisting flood-affected citizens