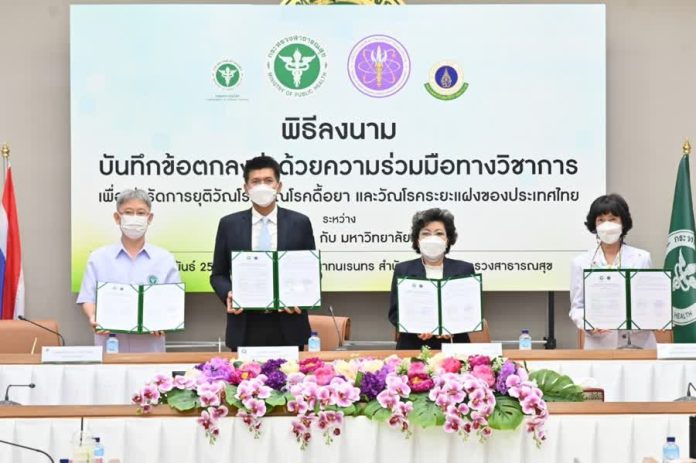 The Department of Disease Control (DDC) has joined hands with Mahidol University to study and find a better way to eradicate tuberculosis in Thailand.

The DDC and Mahidol University’s Faculty of Medicine at Siriraj Hospital recently signed a new academic cooperation agreement on the elimination of tuberculosis. This agreement renews efforts laid out in the previous cooperation campaign, which ended in May of last year, with a focus on the development of laboratories for tuberculosis research.

The agreement aims to enhance the expertise of healthcare professionals in Thailand and abroad, as well as promote research and cooperation to improve diagnostics and treatment for tuberculosis patients.

It also aims to support the development of tuberculosis screening management and the creation of a database for tuberculosis patients.

Deputy Public Health Minister Satit Pitutacha said that although tuberculosis can be prevented and treated, it is necessary to manage other risk factors such as poverty, fragility, and marginalization. Assistance also needs to be provided to vulnerable groups such as inmates, migrant workers, and villagers in border areas.

Each year, Thailand records around 150 cases of tuberculosis per 100,000 people.

However, the nation has been largely successful in its tuberculosis control efforts in recent years, resulting in its removal last year from the World Health Organization’s list of countries with a high burden for drug-resistant tuberculosis.

Tuberculosis (sometimes can be shortened to TB) is a disease caused by bacteria called Mycobacterium tuberculosis. The bacteria usually attack the lungs, but they can also damage other parts of the body.