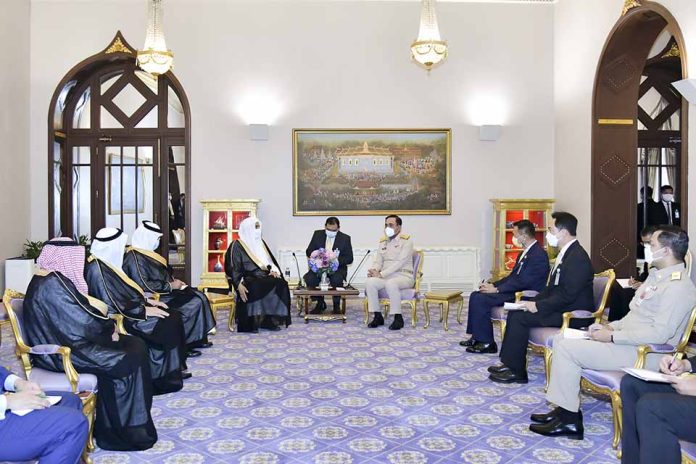 A first signal comes after that Thailand’s prime minister welcomed on Monday the chief of the Muslim World League, who arrived in Bangkok for meetings with Thai officials and religious leaders.

Thai government spokesperson Thanakorn Wangboonkongchana said in a statement: “It is hoped that the secretary-general’s visit will bring a close relationship between Thailand and the Muslim world.

The Secretary-General of the Muslim World League commended Thailand as a role model for multicultural society and expressed his support for the Thai Government’s efforts to promote diversity.

The MWL chief is the first high-ranking visitor from Saudi Arabia to arrive in Thailand since the restoration of ties between the two kingdoms last month.

According to a release from the Ministry of Foreign Affairs, H.E. Dr Mohammad bin Abdulkarim Al-Issa, Secretary-General of the Muslim World League, paid an official visit to Thailand as a guest of the Ministry of Foreign Affairs from February 14 to 18, 2022. The MWL chief is the first high-ranking visitor from Saudi Arabia to arrive in Thailand since the restoration of ties between the two kingdoms last month.

In late January, the Thai prime minister visited Riyadh at the invitation of Saudi Crown Prince Mohammed bin Salman, in what was Thailand’s first top leadership visit to Saudi Arabia in three decades.

“Now with the new Thai-Saudi Arabia relations, the reception and travel are more convenient,” he said.

“The visit can be seen as an encouragement of the restoration of relationships and the connection in the people-level, which is now being more official and convenient.”

The Secretary-General of the Muslim World League paid courtesy calls on His Holiness the Supreme Patriarch of Thailand, Prime Minister Gen Prayut Chan-o-cha, President of the National Assembly and Speaker of the House of Representatives, and other diplomats in the country during his visit. He delivered a keynote presentation address on “The Importance of Alliance of Civilizations” at Chulalongkorn University and a special lecture on “Generosity and Inter-Religious Relations” at the Central Islamic Council of Thailand. The Secretary-General was awarded an Honorary Doctorate Degree from Fatoni University at the Al Meroz Hotel in Bangkok in recognition of his contributions to the international Muslim community.

According to the MFA, the Secretary-General praised Thailand as a model for multiculturalism and expressed his support for the Thai government’s efforts to promote a multicultural society, in which people of different religions can coexist peacefully and harmoniously. The visit also contributes to a better understanding of interfaith dialogues and tighter cooperation between the Thai government and the Muslim World League.

Thailand also welcomed the previous Secretary-General of the Muslim World League on two occasions, in 2007 and 2012.

The Muslim World League is an international non-governmental Islamic organisation based in Mecca, Saudi Arabia. It was established on 18 May 1962 by the government of Saudi Arabia. It aims to present the true Islam and its tolerant principles, provides humanitarian aid, extends bridges of dialogue and cooperation with all, engages in positive openness to all cultures and civilizations, and follows the path of centrism and moderation to realise the message of Islam. It does not intend to be involved with any political agenda. The former Secretary-General of the Muslim World League visited Thailand twice in 2007 and 2012.