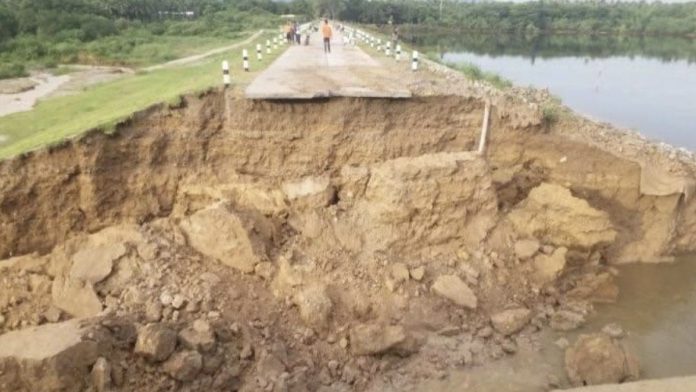 The people are questioning the effective spending of the 102 million baht budget on the construction of Ban Monsop Reservoir after repetitive damages over years.

On February 27, 2022, Mr. Pramual Phongthawadej, House of Representative of Prachuap Khiri Khan, Democratic Party District 3, revealed that the local administrators in Chaikasem Subdistrict, Thongchai Subdistrict, called for Mr. Chalermchai Sri-on, Minister of Agriculture and Cooperatives, to urge the Royal Irrigation Department Repairing Morsop Reservoir, Village No. 4, Chaikasem Subdistrict, Bang Saphan District, Prachuap Province, under the Department of Water Resources, Ministry of Natural Resources and Environment, to use the land budget wisely due to the cost of repairs worth 37.9 million baht since 2014 that took more than 7 years to construct and repair leaks at the ridge of the reservoir continuously for more than 7 years, but was unable to store water. The last time was in August 2019 when the ridge of the reservoir was damaged for the third time. Three leaks were found near the Spillway, causing the ridge to collapse 5 meters deep, more than 20 meters long. The contract with the contractor was made for the construction of a new ridge, with the budget originally set at 118 million baht, but during the auction, the budget was reduced to 102 million baht, and then it would take more than a year to build.

“We will closely monitor the construction so that people in Thongchai Subdistrict and Chaikasem Subdistrict can make use of water for agriculture water after the end of the flood,  especially raw water to produce tap water in the municipality of Ban Krut tourist attractions who have been facing the shortage of raw water for more than 3 years ago. The municipality has to allocate water according to the schedule, causing the villagers and hotel operators to be bothered. In addition, we must consult with the Director-General of the Department of Water Resources in order to expedite the operations to complete by the deadline”

Mr. Pramual added that new construction must be a permanent solution to the leaking problem. After having academic design, the construction needs good quality materials to improve the foundation to be more stable and ask for the shallow basin to be dug to allow the reservoir to have a full capacity of 1.6 million cubic meters and will discuss with the Royal Forest Department if dredging will be a legal problem or not due to the current use of the reservoir, Some areas have not been granted permission for land use. Since the first office ARD initiated the construction of the basin for the first time in 1992 and has now notified the relevant agencies to expedite the alleviation of the people’s suffering during drought, including problems in practice. For example, the Royal Irrigation Department designed a mine in Na Hu Kwang Subdistrict, Thap Sakae District, and also designed Nong Makha Reservoir, Ang Thong Subdistrict, Thap Sakae District, and Chai Rat Subdistrict, Bang Saphan Noi District. However, there is a problem with the request for permission to use the forest area, the two agencies were asked to expedite fixing problems for the people in the area because there is an operating budget, but the process of asking for permission from the Royal Forest Department is being delayed.