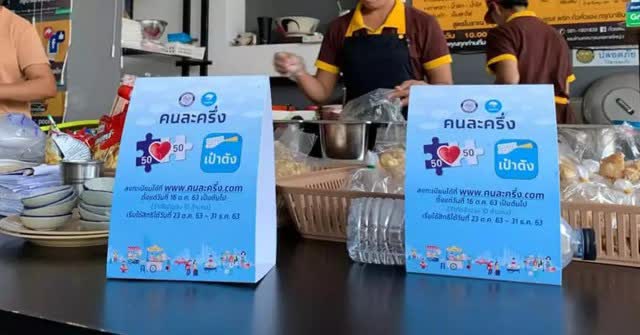 Officials are urging more than three million users of the 3rd phase of the “50-50” Co-pay government stipend campaign to start spending before the end of this month, to retain their privilege in the 4th phase.

Government spokesman Thanakorn Wangboonkongchana said the fourth phase of the “Kon La Krueng” campaign saw 22.23 million people spend 10.43 billion baht over the first ten days of the program. The government has subsidized 50% of eligible users’ spending, amounting to a total of 20.61 billion baht.

However, Pornchai Thiravej, a spokesperson for the Ministry of Finance, gave a reminder to the participants who have yet to take advantage of the new phase. Up to 3 million users have yet to make any purchase through the program.

The current phase of the Co-pay scheme offers to pay 50% of purchases of eligible goods and services for up to 150 baht a day for a total of 1,200 baht. The fund is valid until the end of April.

Participants, however, must make at least one transaction before February 28th, to preserve their privilege.

Eligible goods include food and beverages, and general commodities. The program does not cover lottery tickets, gift vouchers, or cash cards. Participants can also use the stipend to pay for such services as massages, spa therapies, manicures, and pedicures. It is also accepted as a paying method for public transportation.

Prime Minister General Prayut Chan-o-cha said the initiative truly stimulates and drives the economy forward. The comment came after the program was relaunched on February 1st and opened for new user registration on February 10th.

Meanwhile, 11.32 million state welfare cardholders spent 2.2 billion baht under the fourth phase of the state welfare card program. Another campaign that provides financial support to vulnerable people has generated a total of 171.8 million baht since its second phase launch on February 1 as well.