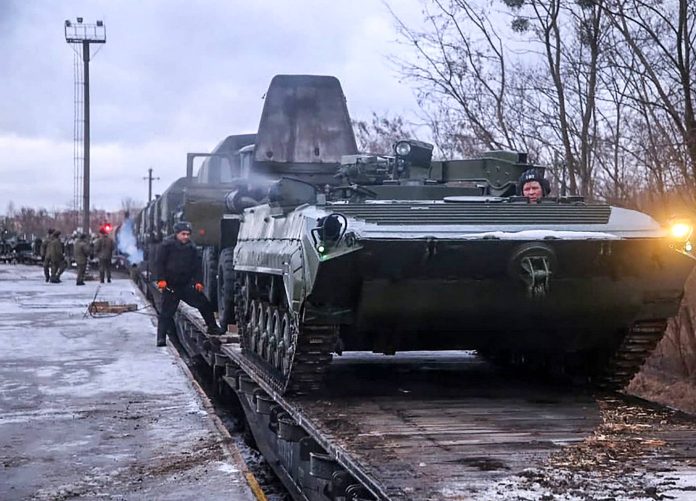 Putin addressed reporters recently in a news conference in Moscow stating, “best decision that Ukraine could take would be to renounce its Nato membership ambitions”.

Russia’s president Vladimir Putin describes an “armed to the teeth Ukraine” as “anti-Russia” and “unacceptable”.  Speaking at a briefing in Moscow, Putin says Russia is “seriously concerned” about the threat of Ukraine developing nuclear weapons.

He claims Ukraine’s president Volodymyr Zelensky’s recent remarks deploring Ukraine giving up its nuclear arsenal in 1994 were “targeted at Russia”, and says the only thing that Ukraine lacks in this regard is the systems to enrich uranium.  Asked whether Russian troops will be deployed to the separatist-held republics or go beyond that, Putin does not give a straight answer.

I didn’t say they will go there straight after our meeting.  He adds that deployment of troops to Ukraine depends on the situation on the ground.  Putin stated: “We’re counting on resolution of all these differences. These differences will be sorted out between Kyiv and Luhansk and Donetsk regions. But for the moment we understand that this is probably impossible in this current situation but we’re hoping for this in the future.”

“We commend Ukraine for its restraint in not responding to Russia’s repeated provocations.

He insists that the military alliance will continue to provide Ukraine with “strong political support”.

We will continue to provide Ukraine with strong political support and allies are providing equipment to help Ukraine defend itself as well as sustained financial support.

Nato is “resolute and united in its determination to protect and defend all allies”, he adds.

Putin has recalled the Russian Federation Council (the upper house of the Russian parliament) for an early evening session to rubber-stamp Putin’s request for permission for the deployment of Russian troops abroad.  The vote formally allows Putin to send troops into the Donbas region of Ukraine.  The decision takes immediate effect, one of the lawmakers said as they discussed the motion.