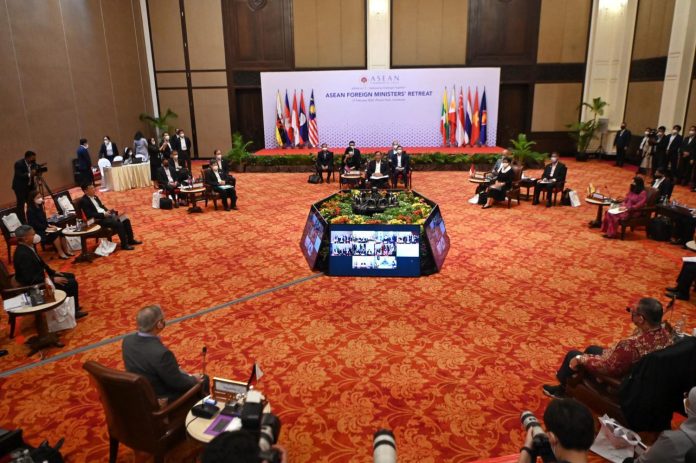 The Thai Minister of Foreign Affairs has called on ASEAN members to engage more in efforts to promote peace and prosperity in the region during a recent virtual ASEAN Foreign Ministers’ Retreat.

Deputy Prime Minister and Foreign Affairs Minister Don Pramudwinai participated in the ASEAN Foreign Ministers’ Retreat (AMM Retreat) via video conference. The event was the first of its kind under Cambodia’s Chairmanship of ASEAN.

Minister Don urged ASEAN members to be more assertive in urging major powers to avoid increasing global tensions. He also called for a strengthening of the bloc’s solidarity to maintain its unity, cohesiveness, and leadership.

The meeting expressed full support for Cambodia and Prak Sokhonn, Deputy Prime Minister and Minister of Foreign Affairs and International Cooperation of Cambodia, who has been named special envoy of the ASEAN Chair on Myanmar. The envoy is tasked with facilitating the implementation of the Five-Point Consensus agreed upon by ASEAN Leaders on April 24, 2021.

However Myanmar a long-time member of ASEAN who did not participate in this meeting had aggressively warned ASEAN members not to get involved in internal politics. As well as requesting all members to cut relation tie armed organizations in Myanmar.

On this occasion, the Thai Foreign Minister updated the meeting on Thailand’s efforts as the ASEAN Coordinator for Sustainable Development Cooperation. He also asked member states to expedite the implementation through the Bio-Circular-Green (BCG) economic model.