Have any attempts been made to hide data on Rayong oil spills? 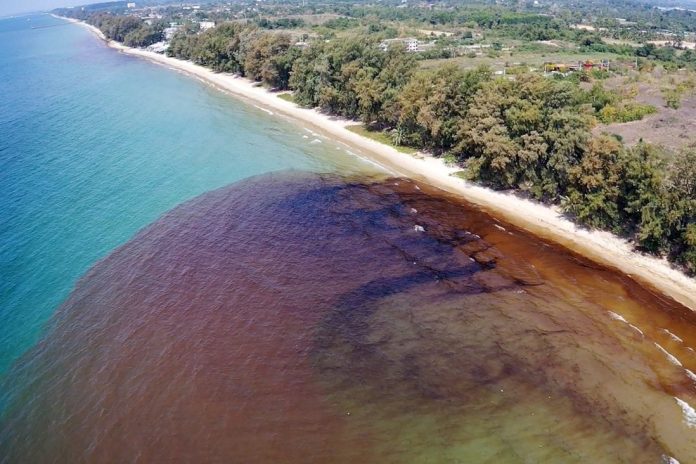 Oil spills off the coast of Rayong were among the issues featured during the non-voting general debate in Parliament on Friday (18 Feb). The opposition alleged that efforts were made to hide information on the spills, with the environment minister denying the allegation.

Natural Resources and Environment Minister Warawut Silpa-archa said the spill on January 25 occurred at 10 PM and the leakage stopped shortly after midnight. He explained that it is very dark out at sea at night and so the location of oil patches could not be immediately determined. Oil booms also could not be rapidly deployed, and so the quickest way to address the spill was to apply dispersants. He added that the oil patches might have all made it to shore if dispersants had not been used before morning.

On the matter of the precise quantity of oil spilt, Warawut said the most accurate answer would come from the company responsible for the pipeline. Although an investigation into the cause of the spill and the amount of oil involved is still ongoing, the company reported that 50,000 litres were spilt. Warawut also revealed that the dispersant used in response operations was from the same brand used in 2013. However, he noted that the agent has since been improved to a level that is considered more biodegradable and capable of breaking down oil more effectively.

The minister explained that microbes will gradually eat away at the mixture of crude oil and dispersant, with the toxicity eventually receding. He also said the amount of dispersant used took into account nighttime circumstances and insisted there was no reason to hide figures for the amount of oil leaked.

Meanwhile An urgent meeting was scheduled on Sunday between officials of the Marine Department, other agencies and representatives of Star Petroleum Refining Plc (SPRC) to consider the oil company’s application for permission to plug the second rupture in their submarine oil pipeline.

The company reports that there are still about 12,000 litres of crude still in the damaged pipe.

SPRC recently sought permission to gain access to the offshore mooring platform to undertake repairs, but the Rayong office of the Marine Department postponed a decision, pending consultation with relevant agencies and more technical details from the oil company over its repair plan.

The company has already deployed numerous vessels to lay booms to contain any spillage which may occur during the maintenance work.

According to Phuripat Theerakulpisut, deputy director-general of the Marine Department, the company estimates that it will take a week repair the pipe, including three days to apply special adhesive material.

Once the crack is sealed, the company will then start pumping the residual crude oil out of the pipeline, followed by the removal of a specific section of the damaged pipe, which will be handed over to the local police as evidence.

On February 10th, about 5,000 litres of crude oil left in the pipeline leaked into the sea off Rayong province, prompting another operation to prevent it from reaching the provincial shoreline and Samet Island.

Yesterday, SPRC sent a drone to a location about 2 nautical miles to the southeast of the mooring platform for an aerial survey, after the skipper of a fishing vessel claimed to have seen traces of oil.

The company, however, said no oil spill could be detected. This was confirmed by satellite images from the Geo-informatics and Space Technology Development Agency (GISTDA).

Regarding claims for compensation by about 2,000 fishermen and clam farmers, the provincial fisheries office said that a meeting is scheduled for Tuesday, between their representatives and SPRC, to discuss the matter.