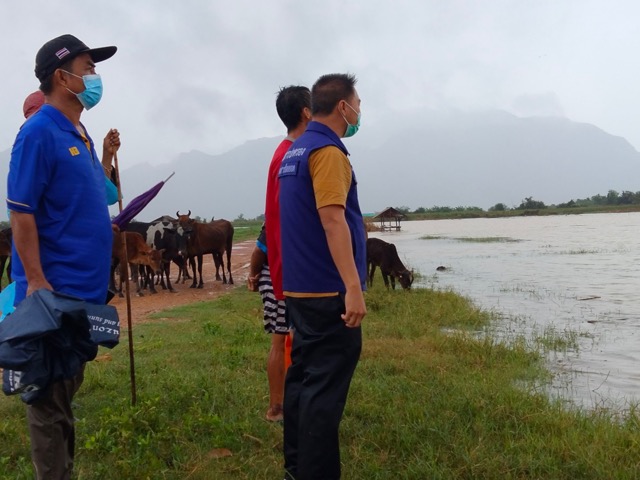 Prachuap Khiri Khan – Farmers in two villages of Sam Roi Yot are in dire straits. After three days of heavy rain, wild water flooded the rice fields that had just been planted resulting in hundreds of hectares of rice damaged

Mr. Chaiphon Srinuanchan, Permanent Secretary of Sam Roi Yot District and Village Headman Mr. Siri Inprasit, surveyed the rice fields, Moo 5 and Moo 2, which have been flooded since last night. Heavy rains in Prachuap Khiri Khan province for 3 consecutive days, have caused floods to flow down from the Tenasserim Mountains resulting in 400-500 hectares of rice fields being damaged.

Farmers had just sowed less than 20 days ago, and paddy fields with a height of about 30-50 centimeters are presently all drowned by The water that flows into the rice fields will never drain. or the drainage channel is so narrow that it cannot be drained in sufficient time when in the Sam Roi Yot field There was a lot of water, the water flooded the rice fields for months before they were dry. Requesting relevant agencies to speed up assistance

Prasopchoke Kongthong, a local farmer, told reporters that his 40 rai of farmland is now all flooded. “I have been sowing rice for about 20 days and all are now damaged. It is completely flooded with all 40 rais of land being under water, where the average cost is currently over 2,000 baht per rai because there will be both fuel costs, rice varieties and the water must be drained out” he stated.

The problem is that Sam Roi Yot Village does not have a channel to drain into the sea. Water will be trapped for about a month or longer before it drains. The village headman came down to check the damage. Presently, the total damage includes 400-500 rai from 2 villages.

“We farmers want the government agencies to help pay the costs and would like to solve the flood problem flooding every time it rains in the area”, said the village headman.

Mr. Siri Inprasit, Village Headman of Village No. 5, Ban Ko Phai, said that the water is now rising and has flooded all the rice that the farmer had sown.  The Headman has coordinated with the district to survey the damage and to find a way to help farmers deal with clogged drainage ditches by seeking a government agency to help in the matter of dredging to allow the water to drain into the sea faster.

Sam Roi Yot will expedite the survey in order to allow the authorities to come and assist. But currently there are farmers have not registered with the agricultural district, which may slow down help.  Farmers stated that they didn’t expect that there would be heavy rain during this period with continues rainfall for 3 days in a row, causing flooding.