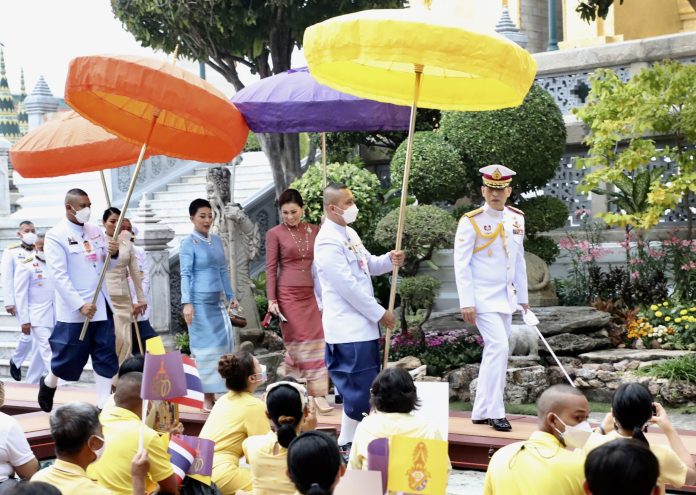 His Majesty the King and her Majesty the Queen proceeded by royal car from the Amphorn Sathan Throne Hall Dusit Palace to the ordination hall of Wat Phra Sri Rattana Satsadaram. The royal couple made a merit-making ceremony for Makha Bucha.

For Thai Buddhists, Makha Bucha, also written Māgha Pūjā, is a day of abstinence, reflection, and visits to the local temple, which culminate in picturesque candle-lit ceremonies in the evening. For those who don’t follow the Buddhist traditions, it’s a day of no alcohol sales.

On this day, Thais make merit at their local temples, where they give alms to monks and maybe even recite Buddhist scriptures. In the evening, monks and devout Buddhists participate in commemorative candlelight precessions.

When the royal couple entered the Wat Phra Si Rattana Satsadaram ordination hall, his Majesty lighted a candle. Then he received a Krathong flower from the official royal ceremony and placed it on a pedestal in front of the Chukchi base. He lighted incense sticks and candles to worship Phra Phuttha Maha Mani Rattana Patimakorn.

After this, 30 monks finished their prayers and sprinkled jasmine flowers on the stone pulpit. His Majesty invited royal officials to approach the pulpit stone.

Finally, King Bhumibol Adulyadej and Her Majesty the Queen bowed before the altar. His Highness received respect from the audience and went out of the temple. The royal couple seated in a royal vehicle and returned to the Amphorn Sathan Throne Hall Dusit Palace.

Phakdi Saeng-Chuto acted as director of the Royal Ceremonial Division.