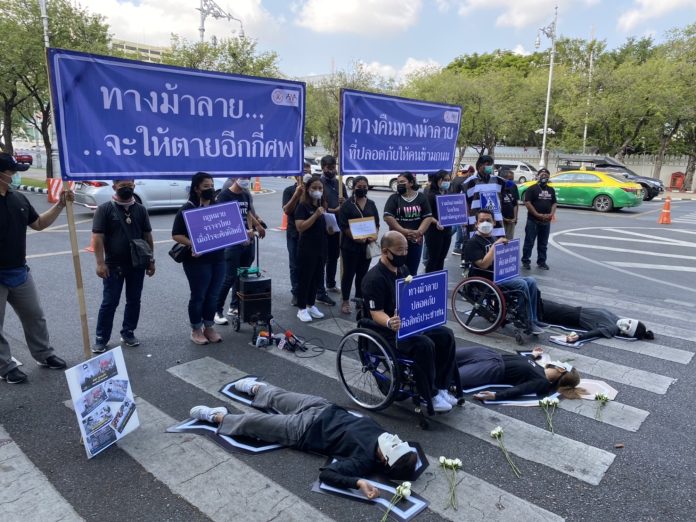 A group of activists campaigning for better living conditions, including about 30 former road accident victims, gathered outside the Government House on Wednesday 26 January to hand over a petition. The petition calls on the government to take action to ensure the safety of pedestrians using pedestrian crossings, following a recent high-profile accident that resulted in the death of a pedestrian.

The group proposed stricter enforcement of traffic laws. The activists want to see a 30km/h speed limit in urban areas, increased fines for any road accident and to treat any fatal accident on a pedestrian crossing as murder. The aim of all these measures is to save lives and reduce accidents.

The death of the young doctor has led to public outrage and calls for stricter enforcement of traffic laws, including the widespread disregard by motorists and motorcyclists of the right of pedestrians to use pedestrian crossings in Bangkok and other cities.

The tragic incident also served as a wake-up call to officials in Bangkok and other provinces to improve the marking of pedestrian crossings, many of which have faded and become invisible.

The group suggested that the government express its condolences to the family of the deceased victim, known as “Dr Kratai”, who was an ophthalmologist at Chulalongkorn University. The 33-year-old was hit by a large motorbike, driven at high speed by a crowd control police officer, while on a pedestrian crossing in Bangkok’s Phaya Thai district on 21 January. The perpetrator surrendered to the police.

As a result of these demands, the Royal Thai Police is proposing to amend the traffic law to increase the fines for violating traffic signs, including crossings, from 1,000 to 4,000 baht.