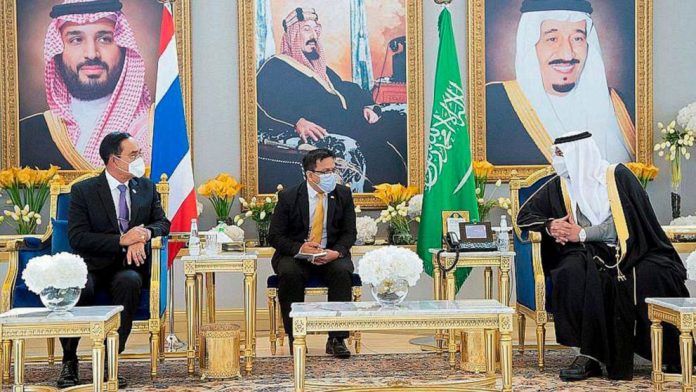 Thailand and Saudi Arabia agreed on Tuesday to restore full diplomatic relations during the official visit of Thai Prime Minister Prayut Chan-o-cha, the first of its kind in more than 30 years.

The new connexions seek cooperation in various dimensions that are mutually beneficial, such as trade and investment, food, security, energy, public health, and tourism, as well as seeking cooperation in new fields with potential such as environment, renewable energy, and digital transformation.

The visit of Prayut to Saudi Arabia came at the invitation of the kingdom’s Crown Prince Mohammed bin Salman bin Abdulaziz Al Saud.

Saudi Arabia downgraded relations with Bangkok after a diplomatic row over theft in 1989 of around $20 million of jewels by Kriengkrai Techamong, a Thai janitor working in the palace of a Saudi prince, in what became known as the “Blue Diamond Affair.” A year after the theft, three Saudi diplomats in Thailand were killed in three separate assassinations in a single night.