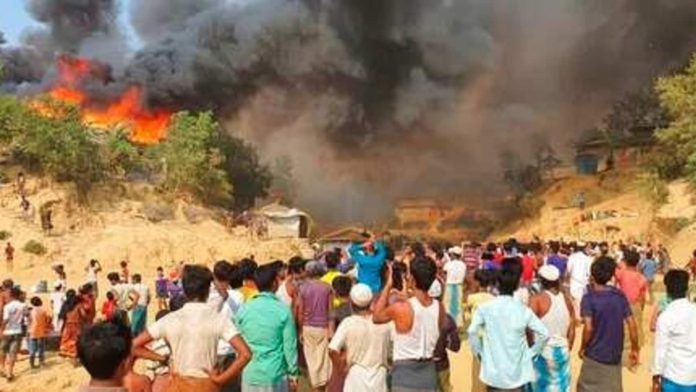 After a fire in a refugee camp in Bangladesh, on the border with Burma, thousands of Rohingyas were left homeless, police said Sunday.

Currently, there are nearly one million Rohingya (Muslim minority of Burma) living in miserable conditions: shelters made of bamboo and tarpaulin …

After fleeing military persecution in their Buddhist-majority country in 2017, they now live in camps in the Bangladeshi district of Cox’s Bazar, where they are considered illegal immigrants.

Abdur Rashid, 22, said he had to run away from his burning house: “Everything was burnt. My baby and my wife were outside. There was a lot of stuff in the house. I saved 30,000 taka (about $350) earned from working, the rest of the money was destroyed by the fire.”

” I am now homeless. I have lost my dream”

“About 1,200 houses were destroyed by the fire,” leaving more than 5,000 people homeless, Kamran Hossain, a spokesperson for the police force overseeing security in the camp, told AFP.

By March 2021, nearly fifteen Rohingya had died and about an estimated 50,000 were displaced after a fire ravaged a huge refugee camp in southeastern Bangladesh.

Bangladesh has been praised for taking in refugees who have crossed the border into Myanmar. However, they failed to find permanent homes for them, leaving them homeless.

Myanmar Rohingya refugees have been sailing to countries like Malaysia, Thailand and Indonesia for years to seek refuge.

Indonesia last month allowed a boat full of Rohingya refugees, which ran aground off its coast, to land after appeals from humanitarian organizations to allow the ship to seek refuge.

Share
Facebook
Twitter
Previous article
The price of pork continues to rise. Merchants say that preventing exports is not enough
Next article
New measures against Covid-19 in schools