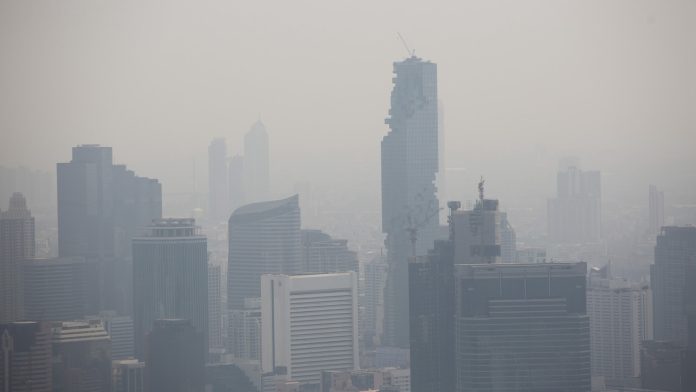 On the morning of December 15, some areas of Thailand had a critical reading of PM2.5. Ministry of Public Health predicts that by the end of 2021, the amount of dust in the air will be more than last year. “Pollution clinics” and dust-free rooms will be coming into service in anticipation of the dust problem, with an emergency operations center slated to be opened once the pollution situation enters the critical phase.

The Deputy Minister of Public Health, Sathit Pitutecha, said that central and eastern areas of Bangkok and the upper part of the Thonburi area, where there is more traffic congestion, will have health effects from December 15 onward.

The Ministry of Public Health has made preparations to prevent health effects from PM2.5 airborne particulate matter. Pollution clinics will provide counseling and treatment, as well as supply individuals with protective equipment for air pollution. 49 online pollution clinics have now come into service nationwide and dust-free rooms are being prepared at various public health venues and at places with a presence of individuals who will be most affected by air pollution. The latter sites include nurseries, retirement homes, and people’s houses.