Chana demonstrators left their protest site to return to Songkhla. 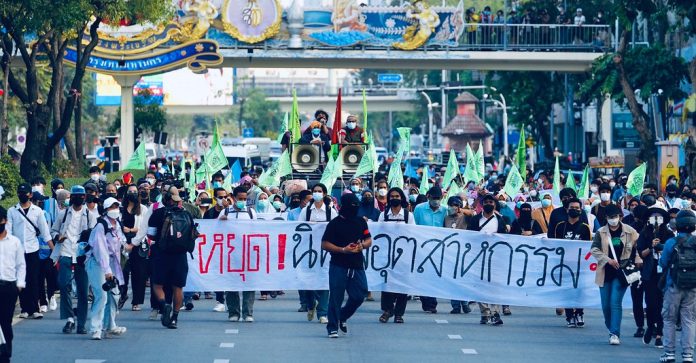 After several days of protests in various parts of Bangkok, the locals of the Chana district in Songkhla and the government have finally reached an agreement that satisfies both parties. The protesters have expressed their satisfaction with the Cabinet’s resolution to delay the commencement of the Chana industrial estate project for a Strategic Environmental Assessment (SEA) to be conducted. The protesters have already collected their belongings and left the scene.

The protesters had already been in Bangkok for several days, showing their disagreement with the development of the industrial estate planned by the government, first in front of the UN ESCAP office and then on Phitsanulok Road, near the Government House. The area has now been opened to road traffic.

Prime Minister Gen. Prayut Chan-o-cha relayed a message through a government spokesperson, he thanked the locals for their understanding of how the government works and for acknowledging his sincerity about addressing the plights of people in the Chana district.

Evaluations will be conducted by academics, experts, representatives of the public sector, and locals. The suggestions of the Chana Rakthin Network and the results of a research committee will be considered together with the EAE.

The Office of the National Economic and Social Development Council (NESDC) has been assigned the role of conducting the SEA with the help of local universities. Deputy Prime Minister and Minister of Energy Supattanapong Punmeechaow have been tasked with overseeing the SEA.

The Cabinet resolution also has the effect of putting a halt to all of the public hearings on the industrial estate’s environmental impact assessments, being organized by TPI Polene Power Plc, until the SEA is concluded. The public hearings had earlier been a point of concern for the Chana Rakthin Network.