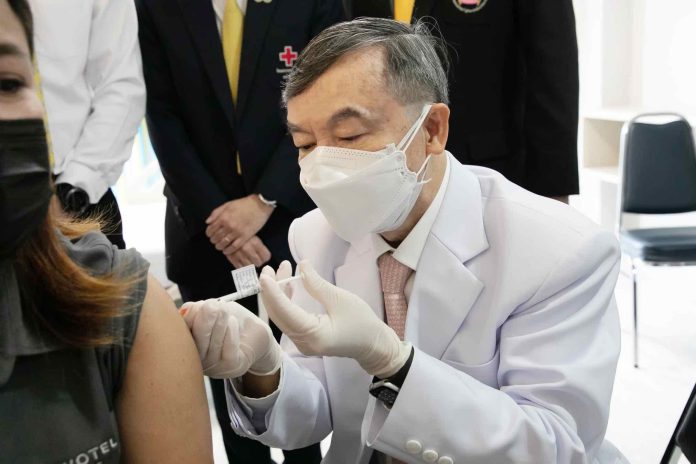 BANGKOK (NNT) – Further progress is being made by Chulalongkorn University in developing Thai-made COVID-19 vaccines, with the ChulaCov19 mRNA vaccine and the Chula-Baiya tobacco leaf-derived vaccine both showing promise.

Dr. Kiat Ruxrungtham, director of the COVID-19 vaccine development project of Chulalongkorn University’s Center of Excellence in Vaccine Research Center and Development (ChulaVRC), said a good immune response was triggered during phases one and two of human trials for the ChulaCov19 mRNA vaccine and no severe side effects such as blood clots were found. In phase two, the vaccine was able to convincingly stimulate antibody response, with the correlation between a bigger dose and greater immune stimulation. The vaccine was two times more proficient at T cell stimulation than the Pfizer vaccine and was effective against Alpha, Beta, and Delta strains of the SARS-CoV-2 virus.

Dr. Kiat said the vaccine was entering phase 3 trials, with doses now being manufactured and bottled in Thailand. If things go as planned, volunteers for vaccine testing will be recruited before the year’s end and the doses will be administered early next year. Data from the trials will be then submitted to the Food and Drug Administration in mid-2022 to seek emergency use approval for the vaccine. If approval is granted, another 30,000 volunteers will be needed to produce safety and efficacy data – Dr. Kiat noted that this step will be a challenge as there will be very few people in Thailand who have yet to be vaccinated by then.

Suthira Taychakhoonavudh, co-founder and CEO of Baiya Phytopharm Co., Ltd., said phase one human trials were conducted for the Baiya vaccine in September and safety monitoring was ongoing. She said immune stimulation findings from this phase were to be determined 50 days after injection, but initial findings point to the vaccine being safe and without severe side effects. Recruitment of volunteers aged 61-75 years old was now taking place for a trial that will be held in December. Baiya Phytopharm has also produced the 2nd generation of vaccine and plans to hold human trials in January