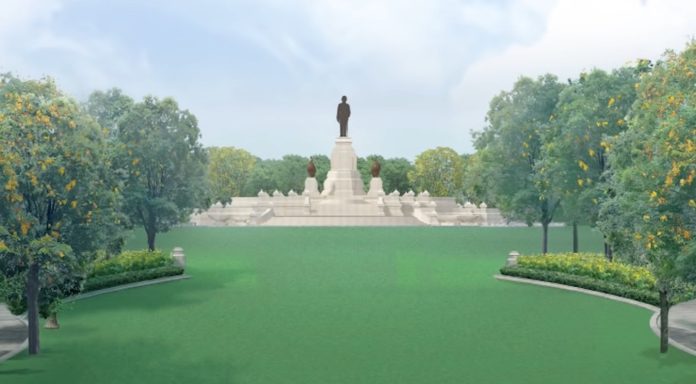 BANGKOK (NNT) – The Bureau of the Royal Household has released simulated images of a new public park to be built at the location where the Royal Turf Club was. This park is to commemorate HM the Late King Bhumibol Adulyadej the Great and is expected to open to the general public in 2024.

The Royal Household Bureau released rendered images of King Bhumibol Adulyadej commemorative park on its website, showing the construction and decoration plan for this park under the Modern Park concept that represents the modernity of Bangkok while focusing on the park’s functions.

Covering 44.64 hectares (279 rai), the park is being constructed on a piece of land once housed by the former Royal Turf Club in Bangkok. This project is initiated by His Majesty King Maha Vajiralongkorn to open this land as a public space for all people.

The landscape of this park will include a lake constructed in the shape of the number 9 in Thai numerals, surrounded by shrubs, water treatment and air treatment plant species, and large trees. This park will also serve a function as a water retention area to help mitigate floods in Bangkok.

The key landmark of this park will be the statue of King Bhumibol Adulyadej, which will be situated at the center of the park.

On Father’s Day this year on 5 December, Their Majesties the King and Queen will be visiting this park to lay the foundation stone for the construction of King Bhumibol Adulyadej’s statue. The park is scheduled to open in 2024.