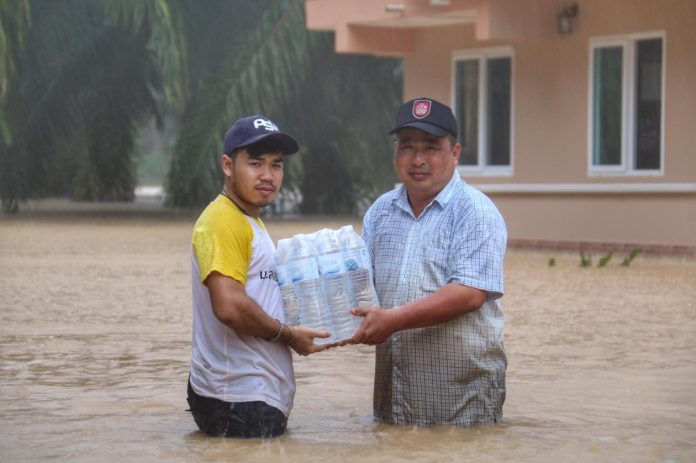 Chumphon has suffered flooding in 6 districts with 6,272 households affected. Authorities are rushing to set up a command center to help villagers.  Travel through the Asian highway has been cut with alternative routes suggested, rail affected also.

On November 13, 2021, news reports from the Chumphon Provincial Public Relations Office concluded that the area of Chumphon was suffering from major floods.   This was bought on from intense high pressure from China extending its ridge to cover upper Thailand. As a result, the northeast monsoon weather prevailed over the Gulf of Thailand and the South, causing heavy rainfall in Chumphon Province.

On the November 12, 2021, around 14:00, a twister like storm blew onshore in the area of Mueang Chumphon District at Tambon Tha Yang and damaged 30 households, 60 people suffered damage, 200,000 baht worth of damage.

Deputy Governor of Chumphon Province Acting for the Governor of Chumphon and heads of relevant government agencies have set up and attended a command area to help the victims while officials from agencies, organizations involved in all sectors mobilized equipment and personnel to solve problems and provide assistance to alleviate the suffering of the people to the fullest potential

The Bangkok Post reported that Prime Minister Prayut Chan-o-cha has instructed the Chumphon governor, Highways Department, Rural Roads Department, State Railway of Thailand (SRT) and local administrative organisation to expedite assistance to motorists on roads to the south, due to heavy floods.

Government spokesman Thanakorn Wangboonkongchana said the routes on Highway Road 41 (Asia Road 41) from Pathom Phon intersection to Lang Suan district had to be closed, as the water was too high for vehicles to pass.

It was also reported that due to the inflow of water on Phetkasem Road, the express trains on southern lines — Nakhon Si Thammarat-Bangkok, Trang-Bangkok, Hat Yai Junction-Bangkok, Sungai Kolok-Bangkok, Bangkok-Sungai Kolok and Bangkok-Hat Yai Junction — must also be suspended.

Currently there is still continuous rain with water levels in some areas still high. Provincial and district incident command centers, along with relevant agencies, are monitoring the situation and will provide assistance 24 hours a day.