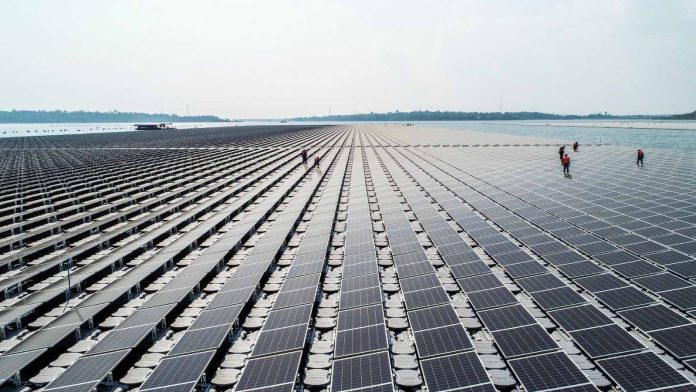 Spanning across an area the size of 160 football fields, one of the world’s largest hybrid floating solar arrays has officially begun commercial operation on a hydropower dam in Ubon Ratchatani Province, marking a major step in Thailand’s planned reduction of its carbon footprint.

The Electricity Generating Authority of Thailand (EGAT) said this week that the 45MW Hydro-Floating Solar Hybrid Project at Sirindhorn Dam began had been switched on at the end of October atop Sirindhorn Dam in Thailand’s Ubon Ratchatani Province.

It is billed as a “hybrid” project as it can not only produce electricity from solar panels during the day but also hydropower from the existing dam.

Egat has claimed the Thai floating PV project as the world’s largest floating solar and hydro plant, which it well may be. On floating solar alone, however, there is a bigger 60MW array on the Tengeh Reservoir in Singapore that was recently completed.

According to EGAT, the 145,000 solar panels have been arranged into seven arrays that cover less than 1% of the entire reservoir. The floating solar plant also uses the dam’s existing transmission system and electrical equipment, helping to reduce overall costs.

Thailand has long relied on coal for power, but plans for new coal-fired projects have been met with opposition over health and environmental risks, and two proposed southern coal plants were shelved in 2018.

In August 2020, EGAT governor Viboon Rerksirathai was quoted in the Bangkok Post as saying that the state utility had power reserves of 40% of total capacity but that it plans to reduces those reserves to 15% to curb high electricity costs.

Development of the Sirindhorn Dam has sought to go beyond power generation by serving as a potential tourist attraction in the Ubon Ratchathani Province, while also creating jobs and income for the community.

According to the EGAT, environmental protection was taken into a careful consideration in the project implementation. Both the solar panels and the floating platform were integrated in an environment-friendly manner, with the solar panels installed at an angle, for example, to allow sufficient space to utilize sunlight for power generation without affecting the underwater environment.

Worth noting is that the “tourist” aspect of the dam is not limited to a dim hope that renewable energy enthusiasts will begin flocking to the area. This project acts as a model for expanding renewable energy security and as a learning center for academia as well as the general public, provincial governor Sarit Witoon said.

The local government has also said it is planning to make the project also a tourist attraction and open it to visitors from early next year, in a move which it said will create more jobs, generate income for local residents, and stimulate the local economic growth

The Electricity Generating Authority of Thailand has decided to move ahead with a larger 15-site portfolio of floating solar projects atop EGAT dams which will reach a total capacity of 2,725MW.

“When all the projects are completed in every dam, we will have total capacity to generate 2,725 megawatts,” project head Chanin Saleechan stated.

Share
Facebook
Twitter
Previous article
In a case of on again, off again, Loy Krathong events will now proceed according to the PM
Next article
BREAKING : Reopening of bars & entertainment venues pushed back to mid-Jan