Bangkok Floods cause Prime minister to order agencies to assist, whilst local Bangkok Governor apologises for the situation 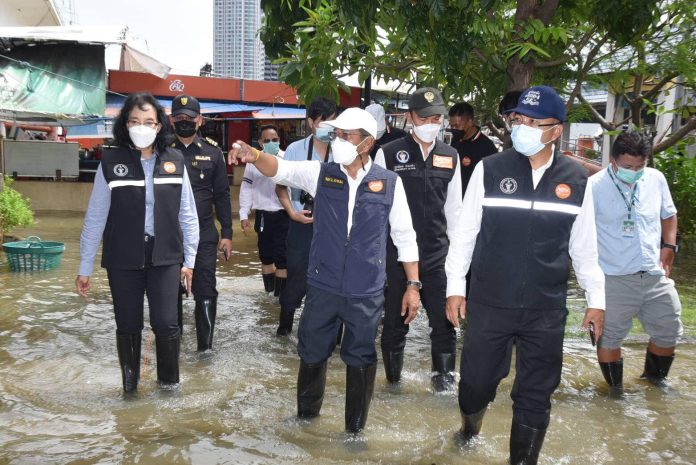 High tides have challenged authorities defending Bangkok from floods, causing the Prime Minister to involve more government agencies in the defence of the capital.  Whilst  Bangkok Governor Aswin Kwanmuang has apologised for the situation, stating that the expectations of flooding levels have been exceeded by the reality.

Prime Minister Gen. Prayut Chan-o-cha has acknowledged updates on the floods in Bangkok and vicinity provinces which were triggered by storm surges in the Gulf of Thailand, and has ordered all agencies to quickly assist people in flooded areas. Meanwhile, the government spokesman has asserted that the prime minister is aware of developments affecting the public and the government is not remaining idle to the problems.

Bangkok Post reported that at the local level Bangkok City Hall reinforced sandbags in several risk areas including Yawarat to prevent more flooding on Monday evening and Tuesday morning.  Bangkok governor Aswin Kwanmuang conceded the BMA undercalculated the water levels from the high tide and offered an apology for the inundation.  “BMA would like to apologise to all people who are affected by the overflow of the Chao Phraya River today,” he wrote on his Facebook page.

Prime Minister’s Office spokesperson Thanakorn Wangboonkongchana spoke of the current (9 Nov) flooding in many areas of Greater Bangkok, attributing the inundation to the abnormally high tide and the inflow of water from upper Thailand. As a result, the water level in the Chao Phraya River rose and overflows occurred in areas located outside flood barriers. Some of the affected localities in Bangkok are Charoen Nakhon, Charoen Krung, Rama 3, and Ratburana. Parts of Samutprakan are also affected.

Meanwhile, the Bangkok Metropolitan Administration is working to pump water out of roads and manage traffic to remedy the situation. Sandbags were also being used to prevent further flooding of roads.

Thanakorn said people can keep abreast of the water situation in Bangkok through the website https://dds.bangkok.go.th/

Deputy Prime Minister Gen. Prawit Wongsuwon, who heads the National Water Command, said warnings of the storm surge have been issued, but some areas that were unprotected by water barriers have become affected. He added that the inundations are not expected to last and the situation would not escalate.