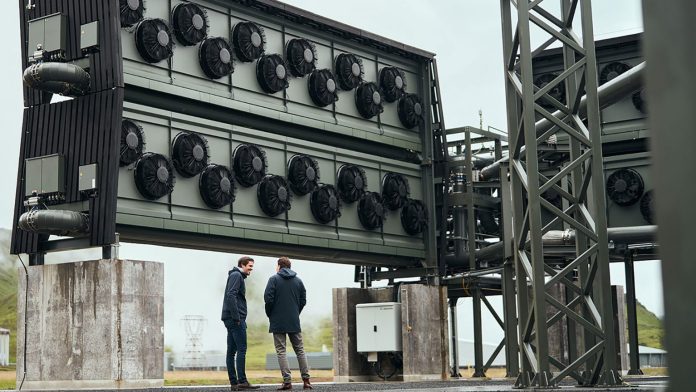 A strange container-like structure has risen alongside clouds of steam near the Hellisheidi geothermal power plant in Iceland’s bleak environment. Its purpose is to mitigate some of the environmental damage caused by carbon dioxide emissions.

Orca, a facility created by Swiss firm Climeworks AG, will absorb CO2. Carbfix, an Icelandic firm, will then inject it deep below, permanently turning it into stone. Orca is the only one of Climeworks’ 16 facilities in Europe that permanently disposes of CO2 instead of recycling it.

The plant, which would capture 4,000 tons of CO2 per year, will be the world’s largest direct-air capture facility. However, this only covers the yearly emissions of roughly 250 Americans. It’s also a long way from Climeworks’ initial target of collecting 1% of global CO2 emissions by 2025 – more than 300 million tons. By the end of the decade, it hopes to have produced 500,000 tons.

“The timeframe has shifted as it takes longer than we initially planned to set up a whole industry,” said Jan Wurzbacher, one of Climeworks’ co-founders, “but we still aim to accomplish our 300 million-ton objective one day.” “We have chosen to expand up this facility and create an approximately ten times larger plant in around three years since the demand for carbon removal at Orca is already so high.”

Carbon capture is attracting a lot of money as corporations and governments look for methods to combat global warming, which is already generating severe weather events. Activists warn, however, that spending too much on carbon-removal technology might divert attention away from the urgent need to reduce emissions.

Climeworks’ major challenge is to reduce the cost of their service. Individuals who wish to buy carbon offsets might pay up to $1,200 per ton of CO2 to the firm. The cost per ton for large purchases, such as those made by Bill Gates, is closer to $600.

Climeworks hopes to reduce the cost per ton to $200 to $300 by 2030, and to $100 to $200 by the middle of the next decade, when its operations are fully operational, according to Wurzbacher. With European carbon prices at 62 euros ($73) per ton and many analysts predicting that they will soon rise above $100, polluters would be better off using Climeworks than paying the penalty.

Climeworks’ goals are fair when contrasted to the billions of dollars spent yearly on electric car subsidies, which cost roughly $500 every ton of CO2 saved, according to Christoph Gebald, another co-founder of Climeworks. “We would scale up lot faster if this existed for what we are doing,” he added.

According to Wurzbacher, Orca cost $10 million to $15 million to create, including building, site development, and storage. “The cost per ton of Orca may be less significant than what we will learn, which will let us to scale up faster and decrease prices,” he added.

Climeworks is funded by a consortium of private investors and Zuercher Kantonalbank, a Swiss bank. Microsoft Corp.’s climate innovation fund has also committed to debt funding. Climeworks’ income comes mostly from corporate customers such as Microsoft, Stripe Inc., Shopify Inc., and Swiss Re AG, despite the fact that it is currently unprofitable. A total of 8,000 private consumers have also registered. Subscribers, according to Wurzbacher, will eventually account for half of Climeworks’ earnings.

However, according to the United Nations Intergovernmental Panel on Climate Change, scaling up carbon removal technology might help the globe stay below 1.5 degrees Celsius.

In June, Climeworks’ head of climate policy Christoph Beuttler told Dezeen that extracting carbon from the sky rather than the ground might be a cyclical resource that could be used to power planes and make cement.

Share
Facebook
Twitter
Previous article
Thailand ends Paralympics with bronze to finish 25th on medals table
Next article
According to a study, the majority of people believe Prayut will be serving his final term as Prime Minister