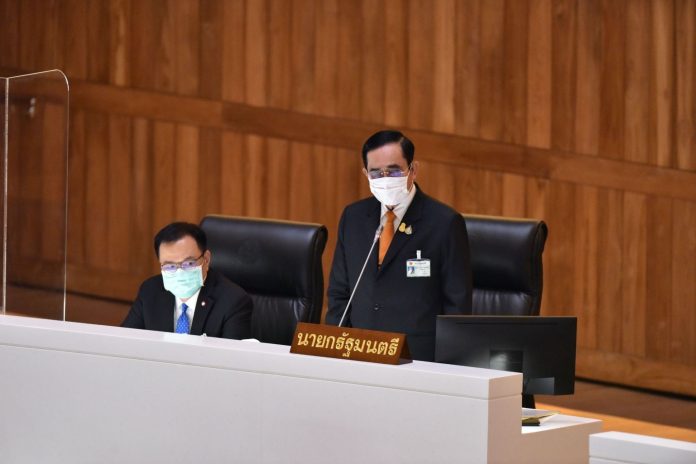 Executive Gen. Prayut Chan-o-cha on Tuesday apologized to the general population for the lives lost from COVID-19. “I am sorry and would like to apologise to those who are unhappy… We are saddened together by those who fell sick and died. I had lost my father and mother too but not to COVID-19,”.

As of Tuesday, 11,841 individuals have passed away because of COVID-19 and 166,992 individuals are fighting through the symptoms and being taken care of. Prayut promised to distribute 8.5 million ATK free test kits to the public, but said it’s a hard task to make it freely accessible to everyone.

Opposing side talked about Covid’s impact on the economy demonstrates government simply having poor management, and Prime Minister Prayut Chan-o-cha said this information to be unfair.

On the second day of the four-day no-confidence debate, Gen Prayut refuted charges made by the opposition.

According to the Prime Minister, no country would have a high GDP during the pandemic.

However, Gen Prayut acknowledged that the country’s economy may take longer to recover since it is highly reliant on tourism, which has been hit hard by the epidemic and is likely to take a long time to recover.

The Prime Minister expressed his displeasure with the opposition’s use of skewed and misleading information to back up its charges against him and the administration.

He stated that during anti-government rallies, for example, the opposition claimed that demonstrators were not utilizing weapons when, in fact, they were.

“I always have respect for several good people [in the opposition camp] who always put the public interest ahead of their own. As for some who only think about themselves and aim to destroy us, please stop,” he said.

On Wednesday, Julapun Amornvivat, a Pheu Thai Party MP from Chiang Mai, was the first opposition MP to speak out against General Prayut.

Mr Julapun offered data to support his claims that the administration has failed terribly in managing the country’s and economy.

He predicted that the mishandling would result in a recession lasting at least two years.