Diesel-Killing Locomotive Of The Future Runs On Solar Power 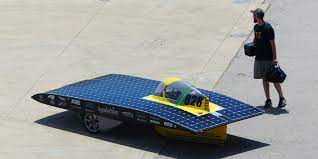 The creators of the solar-powered locomotive of the future were aiming to set a Guinness record for speed last weekend, and that is more than just your ordinary attention-getting stunt. Demonstrating the functionality of PV panels on rail cars could help set the stage for solar power to knock diesel fuel out of the railroad business. No word yet on the official results, but solar is beginning to wiggle its way into a field dominated by fossil fuel.

The Solar Train Of The Future Hits The Tracks, With Only Solar Power

When people say “solar train,” they usually mean a battery-powered train charged by solar panels parked in a solar farm, such as the UK’s Riding Sunbeams project. In other words, the solar power is there, but it is not actually along for the ride.

Placing solar panels on the roof of the train itself is a whole ‘nother kettle of fish. A cute retro solar train began ferrying passengers on a six-kilometer round trip route in Byron, Australia back in 2017, but that’s the main extent of the activity so far, at least in terms of powering entire trains with sunlight.