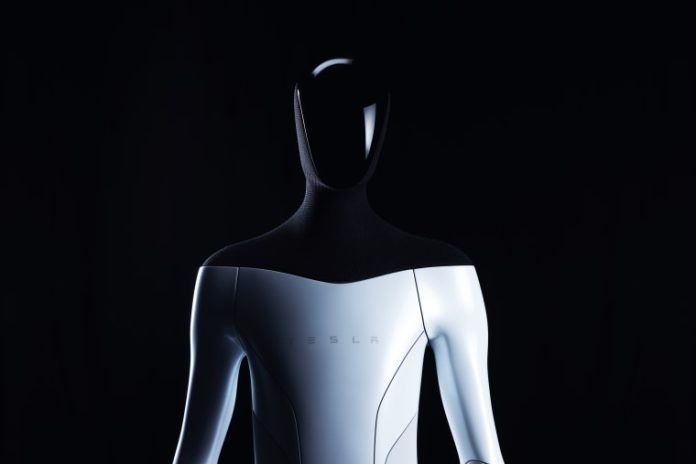 Elon Musk showed off his latest project Thursday night: a sleek white and shiny humanoid robot, sized a bit smaller than the average man, engineered to perform “dangerous, repetitive, boring” tasks – sometime in the future. Called the Tesla Bot, it will be ready for unveiling in prototype form sometime next year, Musk said — but if it’s not, it wouldn’t be the first time a promised Musk innovation turned out to be vaporware.

The mock-up robots present onstage with Musk at a Tesla company event Thursday night were not even vaporware. One was a statue-like model that didn’t do anything but stand still. The other was a person in a costume and mask who performed a crazy dance.

“Obviously, that was not real,” Musk said after the dancer finished. “The Tesla Bot will be real.”

Musk showed a slide with the robot’s specs. According to the slide, it will stand 5-foot-8 and weigh 125 pounds, with a top speed of 5 mph.

“It’s intended to be friendly, of course,” he said.

The robot reveal came at the end of a livestreamed event filled with technical detail about Tesla’s efforts in artificial intelligence.

If Musk was joking about the robot, he didn’t let on. He talked about the need to provide a universal income to those who lose their jobs as robots take over. “In the future, physical work will be a choice,” he said.