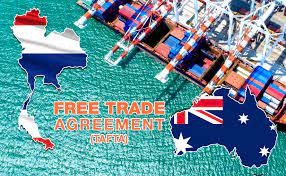 Thailand and Australia have agreed to pursue a strategic economic partnership to boost bilateral trade and investment, with the deal expected to be signed next year.

Speaking after a teleconference with Dan Tehan, Australia’s minister for trade, tourism and investment, Commerce Minister Jurin Laksanawisit said Australia is keen to forge a strategic economic partnership with Thailand in addition to the existing Thailand-Australia Free Trade Agreement (Tafta), in which most products have import tariffs eliminated.

Tafta came into effect on Jan 1, 2005. The agreement calls for the liberalisation of trade in goods, services and investment, as well as cooperation in working out obstacles to trade caused by non-tariff measures, such as restrictive sanitary and phytosanitary regulations and anti-dumping actions.ADVERTISEMENT

The agreement is targeted at expanding two-way trade in goods and services and increasing investment on both sides, as well as strengthening the relationship between the countries.

According to Mr Jurin, the strategic economic partnership is another form of trade and investment relationship that is deeper than an FTA.