Ele returns to the same house! 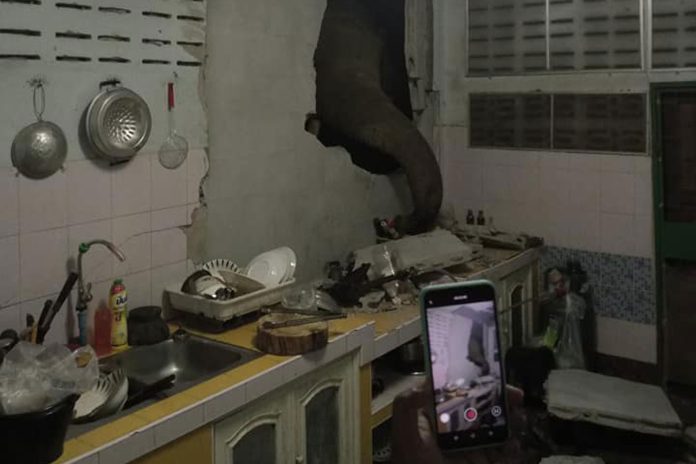 A family was woken up late on Friday night by a familiar visitor — a jumbo who had broken into their kitchen a month ago in search of food.

The hungry Phlai Boonchuay smashed a hole into a freshly fixed kitchen wall and used his trunk to explore leftovers in the kitchen but did not try to enter it.

House owner Ratchadawan Phuengprasopporn, 29, a resident at Chalerm Phrakiat Pattana village, posted a five-minute clip on her Facebook account featuring Phlai Boonchuay surveying the kitchen and grabbing everything he could.ADVERTISEMENT

Pichai Watcharawongpaiboon, director of the Third Conservation Area Administration Office in Phetchaburi, said on Saturday that a patrol tasked with pushing wild elephants into the forests had been alerted by Ms Ratchadawan that Phlai Boonchuay had again raided her kitchen late on Friday night.

The jumbo had smashed the same wall on June 20 to help himself.

Park officials would fix it again on Monday. Areas around the house would also be cleared, said Mr Pichai.

Ms Ratchadawan said she and her family members were sleeping when the sound of fallen objects in the kitchen woke them up.  She rushed to check and was again greeted by Phlai Boonchuay.