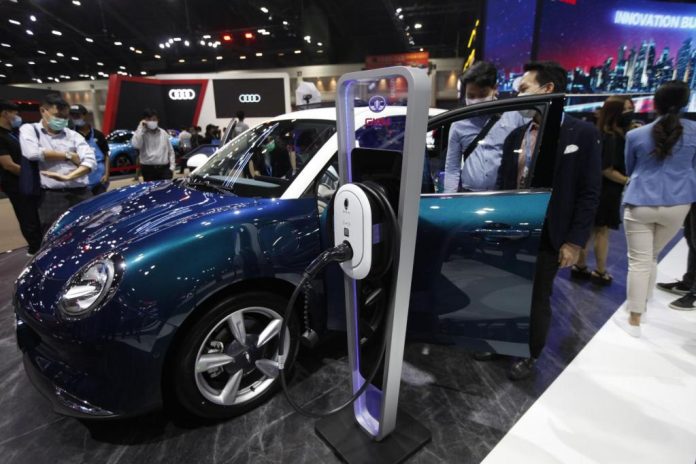 Most executives belonging to the Federation of Thai Industries (FTI) want the government to achieve an electric vehicle (EV) production goal before 2025 despite the state’s latest move to adjust its plan to produce more EVs ahead of its original schedule, according to an FTI survey.

The National New Generation Vehicle Committee last month approved the private sector’s proposal to speed up the EV production plan, setting a goal to have every EV sold in Thailand produced locally by 2035, five years earlier than its original plan.

But 47% of 200 executives in 45 industries who were interviewed in the CEO survey said they want to see Thailand achieve this goal sooner than 2025, said FTI vice-chairman Wirat Uanarumit.

The respondents believe if Thailand solves three issues which are hindering a shift to electric mobility, more people will be encouraged to use EVs.

According to the findings, the government can help accelerate the EV production plan by adjusting the excise tax rate based on CO2 emissions from new cars (76.5%), setting an appropriate electricity rate for drivers of EVs (59.5%) and improving the annual car tax rate to support EV usage (55.5%).

Despite FTI executive members’ support for local EV production, 62.5% stressed a need for the government to help small enterpreneurs along the supply chain of internal combustion engines (ICE) as several thousands of ICE parts will be no longer be required in EV assembly plants.

In response to the committee’s decision in late March, Mr Supant praised the new goal for its audacity, saying it would help realise the vision to make Thailand — once known as the “Detroit of Asia” — to become a global production base for EVs within 15 years.