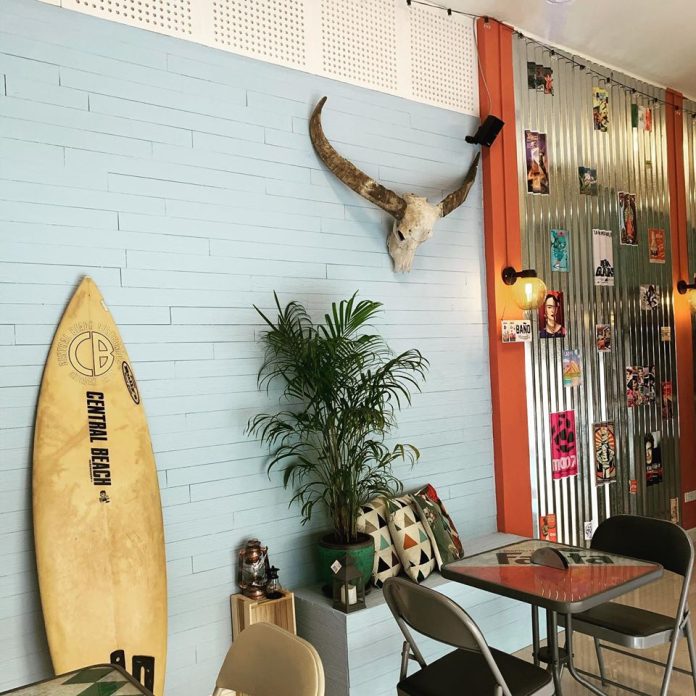 As a Mexican-American who has been to Mexico countless times across Cabo, Ensenada, Tijuana and Mexico City (just to name a few), I was extremely excited when I heard about an authentic Mexican restaurant coming to Hua Hin.

I was invited on a Taco Tuesday in December for Manaw Taqueria’s soft opening to sample some of the items from their menu. I came hungry because I knew I’d be in for a treat.  The first thing that took me by surprise was the beautifully-designed open-concept interior, with elements that made me feel like I was in Mexico. The owner Brad Miller mentioned that the inspiration for his design came from the 1980s-style Midwestern Mexican restaurant decor. Instead of going for a tacky look, he wanted it to be subtle, as if you’re somewhere off the Yucatan coast or on a street corner in San Diego where there are a number of Mexican-owned and operated restaurants.

I grabbed a seat outside and ordered every taco on the menu. The tacos reminded me of the street tacos you would find in Mexico. Each taco is a good portion, small enough to fit into your hand, but filled with just enough stuff that leaves you feeling satisfied but begging for more. The ingredients tasted fresh from the meat to the cilantro. For my vegetarians, they also have vegetable options.

To add to the authentic Mexican environment, Manaw Taqueria is one of the few restaurants in Hua Hin to serve Corona, Mexico’s version of Chang Beer. The beer is served cold or you could get a delicious homemade margarita, all at great prices.

Curious about how such an awesome Mexican experience came to Hua Hin, I asked Brad about what inspired him to open the restaurant. “The inspiration came about a year and a half ago. I felt that there was a need for good quality Mexican food that provided an exceptional value. Most of the Mexican restaurants offered Tex-Mex fare and a price that was less affordable for frequent visits. I had been staying 40 miles south of Hua Hin for the past 3 years and discovered there were not many options in Hua Hin for good tacos. The idea behind Manaw Taqueria is that we have affordable street food that can be consumed multiple times per week and not break the budget. We all know that most people in Thailand eat outside of their home everyday. Western food is typically more expensive than the traditional Thai street food. We use local ingredients to keep our costs manageable so we can offer our customers something comparable in price to the typical rice dish or Pad Thai.”

Brad is exactly right. With the quality and authenticity of tacos that he’s created, I expected the price to be a bit closer to western prices but that isn’t the case here. Brad has priced this restaurant so that it can fit into anyone’s budget for weekly (or daily) visits.

I absolutely loved his chorizo tacos which is always my go-to whether I’m ordering tacos in Mexico, New York City, Los Angeles, and now Hua Hin. Brad recommends the beef cheek tacos, the number one most asked for item. “We slow cook our beef cheek in banana leaves for 5 hours to make the otherwise tough cut of meat tender. It’s a unique item that some customers aren’t familiar with but once they try them, they come back for more,” Brad says.

Manaw Taqueria’s #1 selling item is the carnitas tacos which are slow cooked for 4 hours mixed with a Coca-Cola and orange juice marinade. A first time visitor can start with the Manaw Taqueria value meal. It consists of a chicken taco, cheese quesadilla, chips and salsa and a drink.
If you’re not in the mood for tacos, they also offer a number of other traditional Mexican dishes such as corn in a cup (you can add flaming hot Cheetohs as a topping), quesadillas and tortas. He’s also constantly testing other items such as beans & rice, carne aside tacos, orejas and cajeta (salted caramel). And of course you should always order a side of guacamole which goes with absolutely everything (or you can eat it by itself with chips).
Manaw’s Taqueria’s chef is named Tonic, like gin and tonic. He’s half-Thai, half-Australian and has lived in South Africa, Botswana, Malaysia and spent some time in Mexico City during high school. Brad has worked with Tonic to fine-tune the menu and test new recipes and credits Tonic for the success of Manaw Taqueria thus far. This two-man show is quite impressive.
Another thing that I truly appreciate about Manaw Taqueria is that they’ve embraced social media, one thing that many Thai businesses seem to be lagging behind on. Every day I can expect to see another witty taco-related meme shared on their Instagram page.

So to all of our Hua Hin readers, if you love Mexican food or if you haven’t tried it yet and want an authentic Mexican experience, stop by Manaw Taqueria. And definitely go next Tuesday.